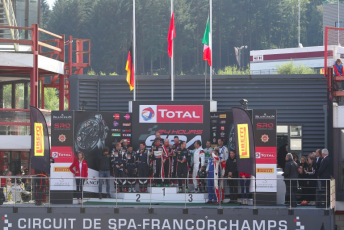 Talbot and team atop the Am Class podium

Brisbane-based Liam Talbot has his eyes firmly fixed on a seat in the Bathurst 12 Hours after taking victory in the Am class at the 24 Hours of Spa.

The 34-year-old Talbot combined with Nicola Cadei and his regular Blancpain Endurance Series co-drivers Marco Zanuttini and Vadim Glitin to steer the #888 Kessel Ferrari to victory on Sunday.

A win at Spa followed success at the previous round in Paul Ricard and has vaulted the Aussie to the lead of the Am standings ahead of the season finale at the Nurburgring in September.

The Spa win is the highlight of Talbot’s stint in the sport to date and comes two years after his then co-driver Marcus Mahy suffered a career-ending accident at the Belgian track.

Mahy suffered bruising to his brain, a broken neck, two broken vertebrae and punctured lungs in a crash that saw him hospitalised for three months.

The 55-year-old British amateur elected against racing again following the injuries but remains involved as a driver coach to Talbot.

“I really want to dedicate this win to Marcus,” Talbot told Speedcafe.com

“It (winning at Spa) is one of those things you don’t dare dream is possible.

“You’re aiming for it, you’re trying give 100 percent, but you don’t think you can win it.

“Late in the race we had our opportunity where we had to give our maximum and just concentrate with a big double stint.

“It wasn’t just gifted to us because cars crashed or didn’t finish, we had to fight.”

Talbot took the start and the chequered flag in the car, surviving heavy pressure at both ends of the race.

“The Mercedes were really aggressive, they’d touch my car for no reason,” he said of the early stages, which saw the AMGs fighting back after early penalties.

“You have a big target on your back with the Am sticker, which I don’t agree with, being bullied like that, but we survived.”

The son of late mining magnate Ken Talbot, Liam had no interest in motorsport growing up and only started racing four years ago.

His introduction to the sport came through performance driver training, which he sought in order to safely handle his high performance road cars.

His next target is February’s Bathurst 12 Hour, where appears likely to line up in a Walkinshaw Racing Porsche.

Walkinshaw managing director Adrian Burgess visited Spa at the weekend following a trip to Stuttgart to meet with Porsche management.

The Walkinshaw team added a single GT3 R to its stable this year but is expected to run as many as three in next year’s 12 Hour.

Burgess hopes to field cars in both the Pro and Pro-Am classes, running a mix of Porsche factory aces and funded amateurs such as Talbot.

“I’m trying to get there for the Bathurst 12 Hour,” Talbot confirmed.

“I really want to do Bathurst 12 Hour so I’ve been speaking to Adrian.”