A Sports Racer competitor has been transferred to hospital with suspected minor injuries following a huge rollover at the Shannons Nationals meeting at Queensland Raceway.

Adam Cranston was sent into a series of violent rolls following contact with Josh Townsend on the opening lap of the second Sports Racers heat at the Ipswich venue.

The pair were fighting over second position when Townsend lost control of his Formula 1000 on his own.

Cranston was unable to take evasive action which resulted in a heavy impact with the car, sparking a frightening rollover that wrecked his West sportscar. 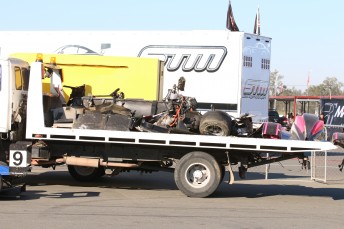 Both drivers, who were alert and responsive after the shunt, exited their cars under their own power before medical teams attended the scene.

Cranston has since been transported to Ipswich hospital for precautionary X-Rays on a suspected broken toe.

The crash follows a frightening fiery incident during Friday practice which saw Mark Laucke emerge unscathed from his West sportscar which caught fire due to a faulty oil filter.