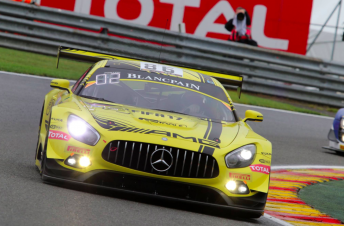 Mercedes swept to the top six places on the grid for the 24 Hours of Spa after a technical fault denied Shane van Gisbergen a shot at pole.

Van Gisbergen’s McLaren had been the last of the 20 cars on track in the Superpole session after the Kiwi’s stunning performance in Thursday night qualifying.

The #58 650S slowed with an unknown issue partway through its first of two laps, eventually stopping on the exit of Stavelot.

“I nearly lost the car on the first lap in Eau Rouge,” admitted Gotz after the session.

“I was a bit frightened that the tyres weren’t ready, but then I put it together on the second lap.

“I’m really happy to be on pole here because there are a lot of good drivers here.

“It’s a good position for the race. That will be a different thing, but it’s nice to be on top.”

The Mercedes domination was completed by Dani Juncadella (#56 Black Falcon Mercedes) in the leading Pro-Am entry.

Laurens Vanthoor proved the best of the rest in the #28 WRT Audi, almost a second adrift of pole position.

A 20 minute warm-up session will take place from 0905 local time on Saturday ahead of the race start at 1630.