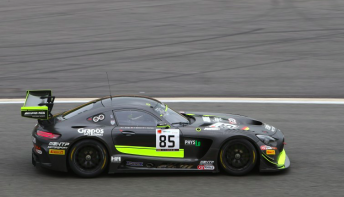 The #85 Mercedes has been elevated to pole

Clemens Schmid has been promoted to pole position for the 24 Hours of Spa after a post-qualifying penalty for team-mate Maximilian Gotz.

Gotz’s pole winning 2:17.65s has been disallowed due to yellow flags being displayed while the #86 HTP Mercedes was on its lap.

The yellows were flying for the McLaren of Shane van Gisbergen, which slowed to a stop on the exit of Stavelot with a technical issue.

Gotz’s first effort stands, ensuring that the car he shares with Thomas Jager and Gary Paffett will start sixth.

Speaking in the post-qualifying press conference before the penalty was handed down, the 30-year-old Gotz admitted he’d seen the flags.

“There was yellow flags,” he said.

“The McLaren was there on the right hand side.

‘It was still rolling a bit and usually they should show the white flags.

“I saw it for myself at the apex (but) it was my last chance (at pole so I completed the lap).”

Schmid is sharing his HTP Mercedes with Luciano Bacheta and Indy Dontje.