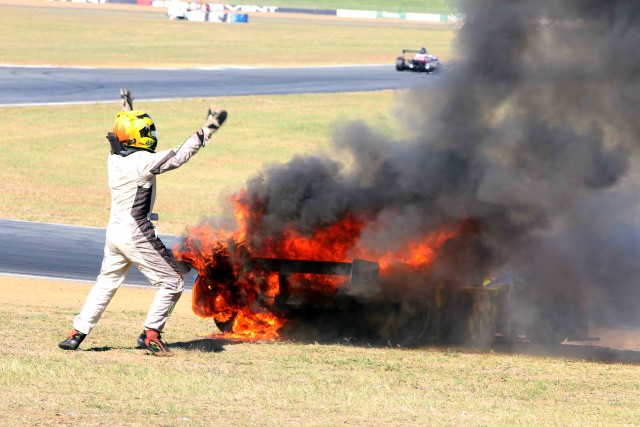 Sports Racer competitor Mark Laucke has emerged unscathed from a frightening fiery incident in practice for the Shannons Nationals meeting at Queensland Raceway.

The South Australian is understood to have lost control of his West WX10RS on the entry to Turn 3 due to oil on his tyres from a suspected broken oil line.

The car then burst into flames after coming to rest in the Turn 3 gravel trap.

Luckily Laucke was able to climb out of the cockpit quickly before fire marshals attended the scene.

The Sports Racer regular has been cleared of any injuries although his car has suffered extensive damage to the rear.

Laucke is now hoping to run a spare car for the remainder of the round.

The driver has left the circuit to retrieve the car which is housed on the Gold Coast.

His team aim to prepare the vehicle overnight for Saturday’s qualifying session.

The Australian Sports Racer Series will contest three races at the Ipswich venue this weekend.

Speedcafe.com will broadcast all the action from Sunday’s races via a live stream service.