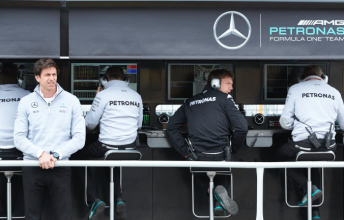 The FIA has decided to remove the controversial radio restrictions with immediate effect following a meeting of the Formula 1 Strategy Group.

The new rules introduced at the start of the season have attracted widespread criticism, highlighted by recent breaches by Mercedes and McLaren at Silverstone and the Hungaroring earlier this month.

The restrictive radio regulations were introduced to stop teams from coaching its drivers how to drive the cars.

However, the rules have provided controversy when a driver is requiring assistance from his team to deal with a critical or technical issue with the car.

Drivers have been particularly vocal regarding the grey area of when a problem is deemed a safety risk.

While the radio restrictions have been lifted, teams are restricted from communicating to drivers on the formation lap.

“At the request of the Teams and Commercial Rights Holder, the FIA has agreed to adopt a more liberal approach to the interpretation of Article 27.1 (that a driver must drive the car “alone and unaided”), read a statement from the FIA.

“With the exception of the period between the start of the formation lap and the start of the race, there will be no limitations on messages teams send to their drivers either by radio or pit board.

“This approach is aimed at providing improved content for fans and spectators, as teams will now be required to provide the Commercial Rights Holder with unrestricted access to their radio messages at all times that their cars are out of the garage.”

The F1 Strategy Group has also agreed to introduce standing starts for wet races that are started behind the Safety Car.

The move arrives following the British Grand Prix where five laps were held under the Safety Car before the green flags flew.

Drivers felt the Safety Car should have been recalled earlier on this occasion as conditions had dried significantly.

The idea under the proposed new rules will see the field line up on the grid for a normal start once the Safety Car has peeled off into the pits when conditions are deemed safe.