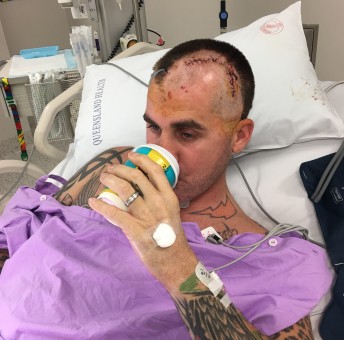 Matt Mingay is recovering from successful surgery to remove residual blood from his brain in the Gold Coast University Hospital.

Mingay remains in the ICU following the latest development in his recovery from a near fatal crash in a Stadium Super Trucks race at Detroit’s Belle Isle circuit earlier last month.

The popular stuntman and action athlete is expected to remain in the ICU for a few days.

Doctors will then assess when best to perform further surgery on his jaw.

A prosthetic chin was inserted to reconstructed the devastation caused to Mingay’s jaw during the accident where the roof of the truck was peeled off and an object is thought to have pierced his full-faced helmet.

CLICK HERE if you are able to make a donation.