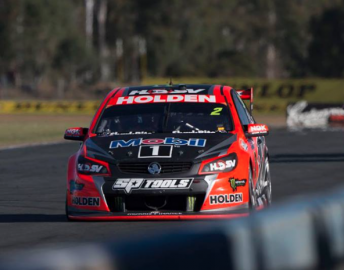 Garth Tander is set for a chassis change ahead of Sydney Motorsport Park as the Holden Racing Team bids to understand ‘weird behaviour’ with its current #2 Commodore.

The HRT has faced a battle to extract car speed with both James Courtney and Tander, this year, but the latter has particularly been left wanting in qualifying.

Tander has qualified no higher than ninth all season, while his average starting berth is 17th over the 17 races.

The 39-year-old says that attempts to utilise Courtney’s set-ups have highlighted a potential fundamental issue with the chassis.

Tander’s current car debuted at Sydney Motorsport Park in 2014 before suffering a major accident at that year’s Bathurst 1000.

It returned at SMP last year following a major rebuild, going on to win the Pirtek Enduro Cup with Tander and co-driver Warren Luff.

“There is no balance with that car,” Tander told Speedcafe.com.

“When you set it up the same as James’ car it behaves completely different.

“We ended up with two very different cars at the weekend and it shouldn’t be happening.

“I won’t be using this chassis for the next race that is for sure.

“I have never had to change the chassis because of a drama, but this is the Bathurst crash car.

“It has been repaired alright but there is some weird behaviour that this car does. Tander’s current chassis was crashed heavily at Bathurst in 2014

“With the field being as competitive as it is you can’t afford to have that. Hopefully a change of chassis is as good as a holiday.”

HRT boss Adrian Burgess says plans to bring in a new chassis for Tander have been aided by the longer lead up time to the Red Rooster Sydney Super Sprint following the cancelation of the Kuala Lumpur round.

“We have got a new chassis which we are planning to bring on stream,” Burgess told Speedcafe.com

“Now with KL not being in place it gives us time to introduce that so we will more than likely bring that out for Garth.

“We can’t say there is something definitely wrong with either car but at the moment they (Tander and Courtney) are not able to drive the same car.

“For us we are more than happy to eliminate that for the next one.”

Having showcased his qualifying prowess in both Australian GT and the Porsche Carrera Cup this season, Tander is confident that the qualifying problem lies with the car.

“It’s not fun qualifying up the back,” added Tander.

“Every time I jump in any other type of car whether it is a GT car or a Carrera Cup car I seem to go quite fast so it gives me confidence that it is not the driving that is falling away.

“It is a team sport. We have just got to sort out our issues and go from there.”