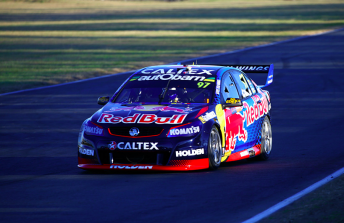 On fresher tyres, the Kiwi overtook Craig Lowndes and Whincup in the final four laps to lead home a one-two-three for Triple Eight.

Starting third, Whincup had made the most of a spirited battle between front-row starting Prodrive team-mates Chris Pither and Mostert on the opening lap.

Mostert was elbowed wide by Pither while on the outside of Turn 2, allowing Whincup down the inside at the following corner

The six-time champion then hit the front with a clean inside move at Turn 4, taking control of the race.

Lowndes also made short work of the battling Falcons to latch onto the back of Whincup, stalking his team-mate for the duration.

Lowndes pitted on lap seven to try and undercut Whincup, but found himself again staring at the back of the Red Bull entry when Whincup pitted and rejoined a lap later.

The Caltex backed driver turned up the pressure in the second stint as Whincup tried to save fuel in order to make the flag.

Facing a six second gap to the leaders when he returned to the track, Van Gisbergen charged, eventually taking Lowndes and then Whincup on laps 35 and 37 respectively.

“I was surprised the other guys pitted as early as they did but they were racing each other,” smiled Van Gisbergen after his third win in four races.

“We went for the time trial option and had good tyres at the end. I’m so stoked.”

Whincup was left to lament a lack of speed compared to his two team-mates.

“We put ourselves in the best position but to win races you have to have car pace and we just didn’t have enough today,” he said.

Tim Slade was the last of all to stop on lap 24 and managed to convert ninth on the grid into sixth at the flag.

Coulthard battled for sixth with Michael Caruso in the early going before tipping the Nissan off the track at Turn 5.

The DJR Team Penske driver was subsequently ordered to slow to readdress the indiscretion, dropping to 12th in the process.

Team-mate Scott Pye started from the pitlane in his repaired Ford and eventually came home 21st.

The race was shortened by a lap after an aborted start called after Cameron Waters’ Falcon broke its driveline on the first formation lap.