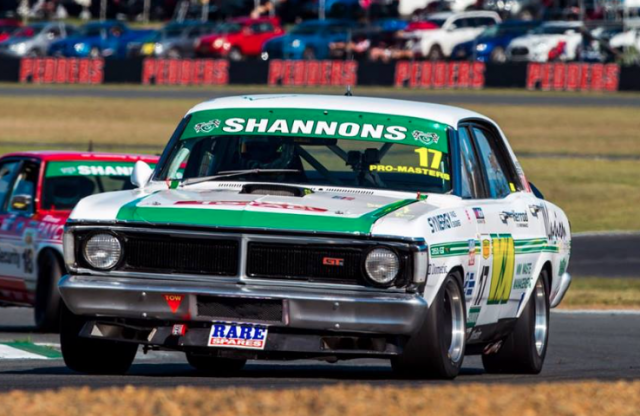 Johnson’s Falcon on track during practice

Suffering a failure in second practice yesterday, Johnson’s team worked until the early hours of this morning trying to fit spare engines offered by fellow competitors.

Installation efforts however proved unsuccessful, forcing the Steve Makarios prepared Ford out of the weekend.

Greg Garwood subsequently offered his Sunshine Coast-based Ford Capri Perana as a replacement for the meeting, but its ineligibility for points saw Johnson decline the gesture.

Johnson had been just nine points adrift of Holden Torana driver and long-time friend John Bowe in the series ahead of Ipswich.

While Bowe won the series last year after missing an entire round, Johnson holds little hope of achieving a similar feat.

“Most of the TCM guys are unbelievable, they were all down trying to help,” Johnson told Speedcafe.com.

“Eddie (Abelnica) and Rusty (French) both offered us engines and we did everything we could to make them fit, but there’s just so many differences between our engine and those we couldn’t get it done.

“Greg offered his car but because it’s running as an invitational it wasn’t worth bringing it down if we couldn’t score any points.

“It’s pretty disappointing. The championship is over now, it’s done and dusted so we’ll have to just go for race wins.

“It was good that we could get the old girl up the front and give JB a run while we did.”

Johnson said that even his father Dick, whose Supercars team has a long history preparing Ford V8 engines, was surprised by yesterday’s failure.

“It looks like the valve seat insert came out of the head, broke the end off a valve and did some damage to the piston and bore that can’t be fixed here,” he said.

“Dad was down here yesterday and said he’d never seen that kind of failure in anything and he’s probably built 400 engines over the years.

“It was a part that you get from the manufacturer and it’s good to go. It was brand new, so it’s just one of those things.”