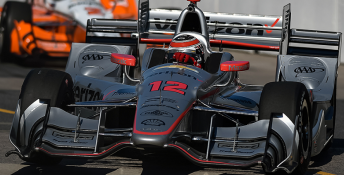 Will Power has bolstered his title chances in Toronto

Australian ace Will Power has set the Verizon IndyCar Series points race alight with his third win of the season on the streets of Toronto.

Power had been the recipient of a lucky strategy call in the last quarter of the 85-lap affair which enabled him to spring to his 28th career win.

The result has thrown the race for the title wide open with series leader Simon Pagenaud finishing ninth after being caught out by an ill-timed Safety Car call which had been a godsend for Power.

The race was turned upside down when defending race winner Josef Newgarden crashed out with 26 laps remaining, bringing out the fourth caution period.

Power had just been summoned to the pits in an uncanny call by Tim Cindric just before the yellow flag was waved.

It turned out to be a race-winning move which left leader Scott Dixon and Pagenaud to pit under yellow.

“It was a great call right there. We had a fast car and I think we could have closed down on Simon (Pagenaud),” Power said.

“It was a late call. Tim called me in and it was perfect timing.

“When I was driving down the lane I saw the yellow lights (caution) come on and I thought ‘wow when has that ever happened’.”

When the race went green with 23 laps remaining, Kanaan was leading Power while Dixon and Pagenaud were buried in 13th and 14th position.

Kanaan ultimately finished fourth after being forced to take on a splash and dash with 10 to go while Dixon was eighth, one place ahead of Pagenaud.

Dixon had dominated the race from the pole position, leading 56 laps, however the Ganassi team being caught red-handed by Newgarden’s caution.

With four laps remaining the race was thrown into a final caution with Jack Hawksworth collecting the tyre barriers with Juan Montoya caught out by the incident moments later.

Hawksworth claimed that he was struggling with front brakes before alleging Pagenaud assisted him into the barriers with a nudge from behind.

Power has now moved to within 47 points of Pagenaud with Castroneves a further 74 points behind the series leader.

The big loser was Newgarden who has dropped from second to fifth in the points 88 behind Pagenaud.