Russell not giving up on Supercars dream

Russell not giving up on Supercars dream 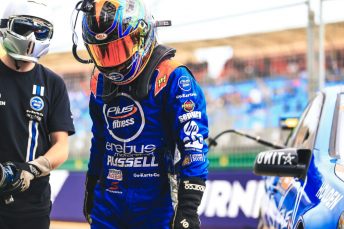 Aaren Russell has vowed that he’s not giving up on his Supercars dream despite a mid-season exit from Erebus Motorsport.

The 24-year-old graduated to the main game this year following six seasons in the Dunlop Series and a promising run as a Bathurst wildcard in 2015.

Russell’s shoestring budget meant he was always in danger of losing the drive, which is expected to be taken by Shae Davies.

“The dream may be over for now, but I’m not giving up,” wrote Russell in an impassioned post on social media.

“I am not a quitter. For all the doubters I have not got to the position I’m in because I can’t drive a race car and money is certainly not something at my disposal.

“I have worked my absolute bum out to get here, anyone who knows me understands the sacrifices we have made and when I have my best chance look out…

“To all the supporters out there, thank you so much for your on going support and kind words, it’s amazing to see how many people have rallied behind us this year even though it has been such a thought year on and off the track.

“We have six months to look at what we can do, I have some amazing people in my corner ( including my family) helping me make the right decisions.

“We will not lie down. Watch this space, I’m not giving up yet… But for now, it’s time to move home with my girlfriend Dom and regroup.”

Russell’s deal with Erebus saw him bring sponsor Plus Fitness and an ex-Walkinshaw Holden to the team.

Without a full budget to complete the season, it is understood that the Russells had hoped to save money by utilising their own mechanics to prepare the car.

Frustration over the cost of upgrades had also built for the Russells as Erebus continues to develop its package with lead driver David Reynolds.

“I wish them all the best for the remainder of the year,” continued Russell of Erebus in his statement.

“Unfortunately it didn’t quite plan out the way we both expected and our views differed from what we first agreed to but things have ended on a positive note.

“The mechanics are an amazing bunch of dedicated and skilled people, I can’t thank them enough for their efforts.

“David Reynolds thanks for being an awesome team mate, you taught me lots, I’ve made an awesome mate, and I really hope good things come to you dude because you deserve it.”