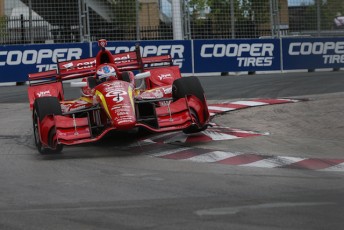 Dixon bounded to the top with a last minute flyer to post a 59.90s lap in preparation for the 85-lap affair at the Exhibition Place venue.

The Ganassi driver prevented Helio Castroneves from earning his third pole of the season.

Castroneves held the top spot until the final moments before settling for second with a 59.94s best which was slightly slower than his lap which topped Round 2.

Series leader Simon Pagenaud clocked an impressive 1:00.22s as he was the only runner to tackle the run off for pole on the harder compound black Firestone rubber.

Penske team-mate Will Power will sit beside him on the second row after a 1:00.40s best while KVSH driver Sebastien Bourdais was fifth.

James Hinchcliffe (Schmidt-Peterson), the only Honda runner to make the final phase of qualifying, was sixth.

Of the key drivers failing to advance to the Fast 6 were Josef Newgarden who will start from eighth.

After his practice crash and further electrical issues, Team Penske’s Juan Montoya will start from ninth ahead of Schmidt-Peterson Motorsport driver Mikhail Aleshin.