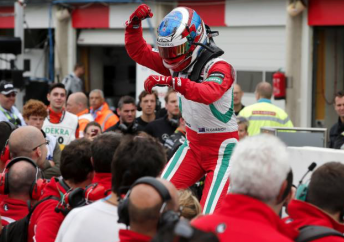 Nick Cassidy has claimed a breakthrough victory in the FIA European Formula 3 Championship at Zandvoort.

The New Zealander produced a faultless drive to lead home his Prema Powerteam team-mate Maximilian Gunther at the Dutch circuit.

After failing to convert his pole position in the opening heat, Cassidy quickly assumed the lead in Race 2 with a move on pole-sitter Callum Ilott in the early stages.

Once in the lead the reigning Japanese F3 champion managed the gap to Gunther, who got the better of Ilott, to take the chequered flag by 1.1s.

The 21-year-old’s maiden European F3 triumph arrived on his 35th start in the category. His success followed a second place finish in the first race.

Championship leader Lance Stroll retired from the second encounter after suffering damaged to his car during the race.

The Race 1 winner was forced to start from the rear of the grid after being excluded from qualifying for a suspension irregularity on his Prema Powerteam entry.

Cassidy will start Sunday’s final heat from second on the grid behind team-mate Gunther.