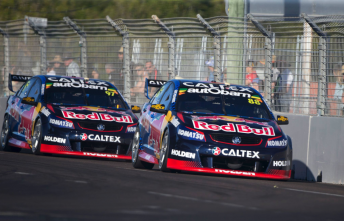 Pre-season predictions that Van Gisbergen’s addition to the team would create internal friction have so far appeared unfounded.

The team, however, endured its most awkward moment of the season to date on Sunday as an early error from Van Gisbergen forced it to switch Whincup to the non-preferred strategy.

Van Gisbergen, who had been open about utilising Whincup’s set-up in order to improve his car from Saturday, expressed disappointment post-race that his team-mate had not made the podium.

Winterbottom moved to third in the championship in Townsville and says that the mood within Red Bull will change as the season progresses.

“We’ll see what happens, there’s a long way to go,” he said of the title fight.

“Those two are going to have to race each other at some stage.

“It’s all ‘lovey dovey’ at the moment, they want each other up here (on the podium), but there’ll be a point where they don’t.

Amid fluctuating form for all teams during one of the most competitive seasons on record, Whincup and Van Gisbergen have been closely matched. 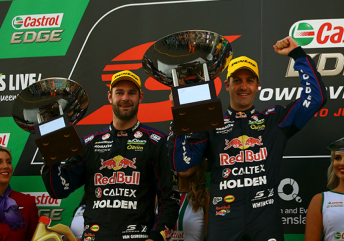 The six-time champion leads his team-mate 8-7 in the head-to-head qualifying and race statistics, while Van Gisbergen is marginally ahead in the win (3-2) and pole (2-1) tallies.

Van Gisbergen’s title charge took significant dents at Symmons Plains and Darwin, where a mistake while leading and a restart error respectively cost a combined 243 points.

Whincup has finished all 15 races, but had poor results in the wet in Adelaide and on the Sunday at Symmons Plains, where he made an uncharacteristic unforced error.

Back to his brilliant best on Saturday in Townsville, Whincup is hoping for a more consistent run through the second half of the year.

“No one has been consistent and if someone can do that they’re going to disappear,” Whincup told Speedcafe.com.

“Earlier in the year we’d just been bouncing around all over the place trying to find the new holy grail (with car set-up), which doesn’t really exist.

“I feel like we’re back on track now, but there’s still a question mark over our consistency from race track to race track.

“If we string three or four rounds together we’ll be much more confident.”

Van Gisbergen meanwhile notes that any one of the top five drivers – which also includes Triple Eight’s third driver Craig Lowndes and Volvo’s Scott McLaughlin – are all major title threats.

“Every weekend those five cars are in and amongst it and there’s a smokey every once in a while that comes out and dominates,” he said.

“Everything is so tight, it’s great to be a part of.”