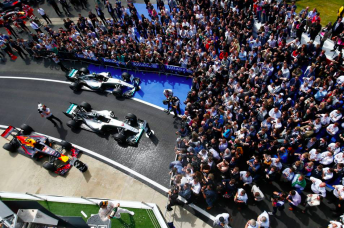 Rosberg was demoted from second to third post-race

Mercedes has elected to withdraw its appeal over the radio message penalty that cost Nico Rosberg second place in the British Grand Prix.

The German was handed a 10 second post-race penalty that dropped him to third in the results after messages delivered to Rosberg were deemed illegal.

Struggling with a gearbox issue, Rosberg was told to shift through seventh gear during the closing stages of the race.

While team principal Toto Wolff insisted post-race that the message was legal as it was necessary to avoid a complete failure, stewards deemed it as driver coaching.

Mercedes has now accepted the stewards’ interpretation of the rules but says it will be seeking further meetings with F1 management to discuss the regulations in question.

“The Mercedes AMG Petronas Formula 1 team today decided to withdraw its notice of intention to appeal against the decision of the stewards of the British Grand Prix,” read a team statement.

“We were able to prove to the stewards that a car-stopping gearbox failure was imminent and, as such, were permitted within the rules to advise Nico of the required engine mode.

“However, the advice to avoid seventh gear was considered to breach TD/06-16, and therefore article 27.1 of the sporting regulations.

“The team accepts the stewards’ interpretation of the regulation, their decision and the associated penalty.

“During the coming weeks, we will continue discussions with the relevant F1 stakeholders on the subject of the perceived over-regulation of the sport.”

Rosberg now leads Hamilton by just one point after 10 races.