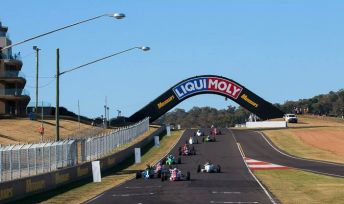 Formula Ford action at Bathurst in 2015

The Bathurst 12 Hour will continue with an unchanged support category line-up next year, much to the disappointment of the Formula Ford Association.

Improved Production Cars, Combined Sedans and the Radical Australia Cup have all elected to return for the February 3-5 meeting.

The news comes as a major disappointment to the Formula Ford community, which had expected to rejoin the program after a year’s absence.

In a statement posted on its website, the FFA informed its competitors that it “will no longer be included in the 2017 Bathurst 12HR support event”.

The FFA had already fielded expression of interest payments from competitors for Bathurst following discussions with event organisers.

“We are shocked at the news which has come out of the blue to us,” said FFA coordinator Phil Marrinon.

“We more than met the event organisers requirements and we find it very surprising that they invited us to then pull the event from us this far into our preparation.

“I have spoken to the event organisers and they apologised and have advised that they have chosen to run the same categories they had last year and there is no option for Formula Ford to be included in the 2017 event.”

Bathurst 12 Hour organisers, which are understood to have seen Formula Ford as a back-up should any of its previous categories have elected not to return, declined to comment on the FFA’s statement when contacted by Speedcafe.com.