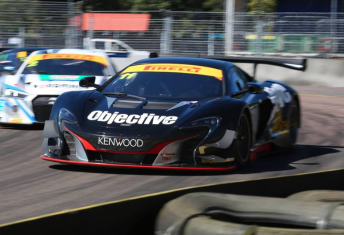 Tony Walls has been awarded victory in the second Australian GT race despite losing the win on the road following a dramatic final lap.

Walls seemed on course to score victory but a mistake at Turn 11 on the final lap seemingly handed the win to a hard charging Klark Quinn in the Darrell Lea McLaren.

Quinn, who led the opening stint of the race from pole, applied pressure on the Objective Racing McLaren of Walls in the final laps having rejoined the race in fifth after the mandatory pitstops.

However, the pass took place under yellow flags which was investigated post race, resulting in Walls being declared the winner.

Lago ran solidly inside the top six for the majority of the race. He held third after the pitstops and moved to second before being passed by Quinn in the final laps.

An impressive stint from Baird saw him haul Mercedes through the pack after spending much of the race outside the top 10.

John Martin lost out in a fascinating battle with Baird to finish fourth in the Walkinshaw Racing Porsche ahead of Christopher Mies in the #1 Jamec Pem Racing Audi.

Mies was another driver to carve his way through the pack after taking over the car, he shared with Tony Bates, in 18th position. Bates had run inside the top five before the pitstops.

The Supabarn Supermarkets Audi of James Koundouris and Marcus Marshall was sixth having been in contention for a podium until the final stages.

The top 10 was completed by Tony Quinn (Aston Martin), Steve McLaughlan (Audi) and the Tekno Autosports McLaren of Jonathon Webb and Grant Denyer.

The Team SRM BMW M6 GT3 crossed the line in 15th after their race was hampered by a drive-through penalty issued to Max Twigg, who punted McLaughlan prior to the pit stops.

The race was punctuated by a Safety Car period when Peter Rullo (Lamborghini) and Ricky Capo (BMW) in the opening laps.

Rullo lost control on the run to Turn 11 while a right rear puncture fired Capo into the barriers in a separate incident.