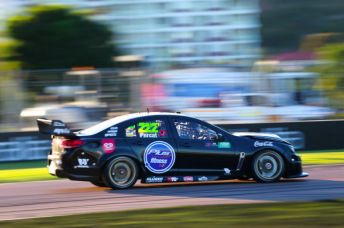 Lucas Dumbrell Motorsport is operating without Barry Hay in Townsville after the team manager was hospitalised with pneumonia.

Hay spent yesterday in Townsville Hospital where he was diagnosed with the debilitating illness.

Released from the hospital last night, the former Supercars Championship winning crew chief is resting away from the track today ahead of further medical checks.

He is expected to remain in Townsville for several days before being cleared to fly home to Melbourne.

The illness comes amid a challenging week for the minnow squad, which hit the headlines pre-event when a dispute with sponsor Freechoice reached the Brisbane Supreme Court.

In addition to its two Supercars Championship entries, LDM is also fielding Australian GT and Dunlop Series cars in Townsville for father and son Peter and Alex Rullo respectively.

“Barry is pretty sick, but he (Campbell) has been in contact with him throughout.

“It’s a big weekend with the Dunlop Series and Australian GT running too, so there’s been a lot going on.”

Hay had been at the heart of the team’s negotiations with Travers Beynon’s Freechoice, which resulted in the two Holdens running without any major sponsor branding on Friday.

The team scored a last minute sponsorship deal with Plus Fitness prior to Saturday’s opening race which continues today.

LDM was a surprise beneficiary of a trackside spat between company owner John Fuller and Erebus Motorsport, which fields Aaren Russell’s Plus Fitness backed Holden.

The disagreement, believed to have centred around Plus Fitness’ efforts to activate the sponsorship with promotional material in the paddock, saw Fuller storm from the circuit.

Wayne Russell, who put together the Plus Fitness deal to run his son Aaren under Erebus’ second Racing Entitlements Contract this year, declined to comment on the matter.

Discussions with the sponsor over the future of the entry are expected to take place this week.

Dumbrell told Speedcafe.com that he was happy to help out in an unusual situation.

“We had two blank cars and after qualifying John and Wayne asked me if I was able to put the branding on the car,” he said.

“We were happy to do it and see Andre (Heimgartner) get a solid result for them (15th) in the race.”

Team-mate Nick Percat failed to finish Saturday’s race after a late mechanical failure, while Rullo was a retirement in the Dunlop Series as weekend-long engine trouble continued.