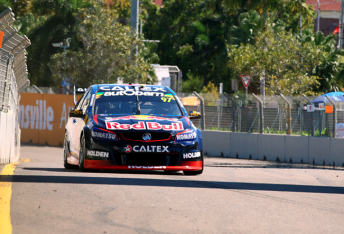 Red Bull’s Shane van Gisbergen took his third win of the Supercars season in a Townsville finale spiced up by a late Safety Car.

The Kiwi took the flag 1.2s ahead of James Courtney, who blazed through from ninth while on new tyres in a six lap sprint to the finish.

Courtney edged Mark Winterbottom at the chequered flag, continuing the Holden Racing Team’s run of scoring a podium finish every year since the event’s inception.

Saturday winner Jamie Whincup was just fourth after losing out on pit strategy early in the 200km race.

Crucially, a lock-up from Van Gisbergen in the opening laps while runinng fourth behind Winterbottom, David Reynolds and Whincup saw Red Bull elect to switch strategies between its two cars.

Whincup had pit priority due to his track position but, with Van Gisbergen nursing a flat-spotted tyre, it was the Kiwi in first on lap 12.

While the other front-runners pitted shortly after, Whincup ran a further 12 laps before finally making his first stop, rejoining down in 12th after a long fuel fill.

The second stops were triggered a short time later when the Safety Car was called to retrieve Kurt Kostecki’s Holden, which made the fence at Turn 10 after a mechanical failure.

Winterbottom, Van Gisbergen and Reynolds remained the top three for the restart 35 laps from home, with Whincup vaulting up to fourth thanks to a shorter fill time.

Van Gisbergen made his move soon after the restart, darting down the inside of The Bottle-O Ford before easing out to a near 2s lead.

A second Safety Car was required to retrieve Andre Heimgartner’s Holden 11 laps from home, triggering another flurry of stops.

Eighth-placed Courtney was the highest of those to stop, leading a train of cars including Cameron Waters, Michael Caruso and Jason Bright to pitlane.

Craig Lowndes, who fell dramatically backwards while struggling with tyres in the third stint, and Scott Pye were also on fresh rubber after stopping just prior to the yellows.

Courtney proved the only one able to cut through into the top five in the sprint to the end as Waters, Pye, Caruso, Bright and Lowndes ended up sixth through 10th.

Fifth meanwhile proved a solid reward for Scott McLaughlin, whose championship hopes suffered a blow with an opening lap tangle on Saturday.

Reynolds also ran at the front of the field for the majority of the race but ended up just 14th as he fell behind those on newer rubber.

Nick Percat’s horror weekend ended with a second steering failure in as many days, resulting in the LDM Holden nosing into the tyres at Turn 11 early in the final stint.

Todd Kelly and Tim Slade had found trouble at the start, with a tangle on the run to Turn 1 sending both to the pitlane at the end of the opening lap.

The results see Van Gisbergen move to second in the standings, 53 points adrift of leader Whincup.