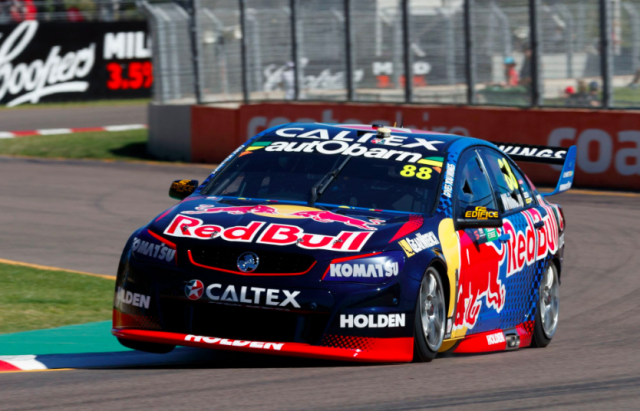 Jamie Whincup recorded his 99th career Supercars race win with a dominant display in the opening 200km contest at the Castrol Edge Townsville 400.

Pole-sitter Whincup’s only real threat occurred when a late Safety Car brought team-mate Shane van Gisbergen onto his bumper for a two-lap shootout to the end.

Two lapped cars, however, split the duo at the restart, helping Whincup sprint away to a 3.6s victory.

The result marks championship leader Whincup’s eighth victory on the Reid Park street circuit and his first since the opening race of the season in Adelaide.

Van Gisbergen had stalked his team-mate throughout the early stages, but couldn’t make a two-lap undercut work at the first stop.

The gap between the pair expanded to 10 seconds as the Kiwi’s tyres faded in the second stint, leaving Whincup in a dominant position.

Van Gisbergen spent much of the third and final stint in a battle with Chaz Mostert, who took the place early before Van Gisbergen wrestled it back 15 laps from home.

Winterbottom had run longer than his nearest rivals on both stints, subsequently benefitting from fresher tyres in the closing stages.

James Courtney was third in the early going but eventually fell to sixth as Will Davison edged him at the flag.

Garth Tander, who had charged from 20th on the grid to 12th in the opening handful of laps, followed his team-mate home in seventh.

Fabian Coulthard took eighth after coming out on top in a race long battle with lead Nissan driver Michael Caruso.

Veteran Todd Kelly completed the top 10 in his 500th championship race start in the category.

Those to strike trouble included Tim Slade, who was spun out of 10th place by Rick Kelly at Turn 11 on just the second lap.

Scott McLaughlin’s championship bid took a major hit on the opening lap as contact with Dale Wood required the Volvo to make a trip to the pitlane for repairs, resulting in a 24th place finish.

Rookie Kurt Kostecki was 25th after losing a handful of laps fixing damage after drifting into the Turn 10 concrete on lap 51.

The late Safety Car was recalled to retrieve Percat’s Holden, which was parked at the entry to Turn 7 with broken steering.