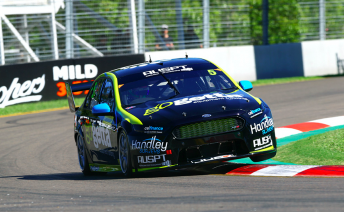 Le Brocq watched the closing minutes from the garage with his 1:14.02s best lap coming on his fifth and final tour.

Gary Jacobson, in another Prodrive prepared Falcon, will join Le Brocq on the front row after a 1:14.35s best.

Jacobson brushed the wall at the exit of Turn 2 late in the session as he pushed to better his team-mate.

Taz Douglas (Eggleston Holden) found trouble late in the session when he parked his machine on the chevron near the pit exit.

Douglas will start from 18th in the 19-car field.