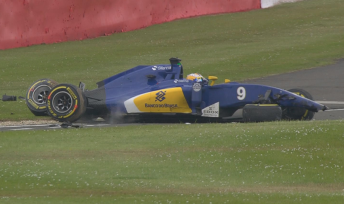 Marcus Ericsson has been transferred to hospital for precautionary checks following a heavy crash in final practice for the British Grand Prix.

The Swede hit the barriers hard after losing control of his Sauber on the exit of Stowe corner in Practice 3 at the Northamptonshire circuit.

The incident brought out the red flags with 15 minutes of the session remaining.

Ericsson was able to extricate himself from the car under his own power, but the FIA has ordered Ericsson to undergo a further examination in hospital.

Sauber faces an uphill battle to repair the car in time for qualifying if Ericsson is deemed fit to compete.

The ferocity of the impact saw the steering wheel disconnect from the column.

Ferrari’s Sebastian Vettel suffered a suspected gearbox failure which could land him a five-place grid penalty heading into qualifying.