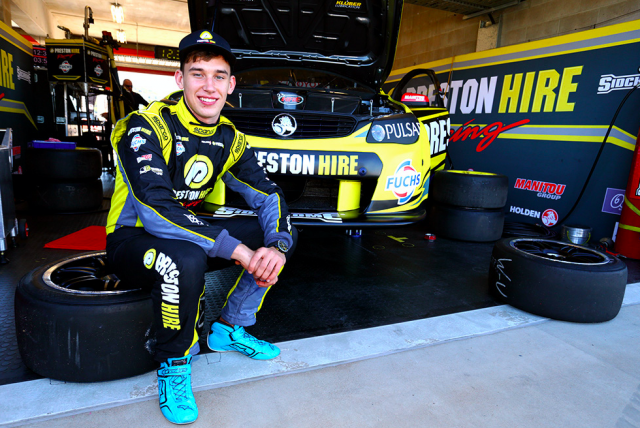 Supercars rookie Kurt Kostecki says that his run in Team 18’s Holden in Townsville will be a litmus test for a wildcard entry into the Supercheap Auto Bathurst 1000.

The 18-year-old is driving in place of the injured Lee Holdsworth this weekend as part of a rescue deal that has seen the West Aussie supply his Dunlop Series Holden to Team 18.

The Triple Eight-built chassis is usually campaigned under the Kostecki Brothers Racing banner in the second-tier series alongside an identical car for his younger brother Jake.

As he prepares for opening practice in Townsville, Kostecki has declared his desire to compete in the Great Race with his own team.

“We’ve certainly discussed it (a wildcard) and if we can have some solid results here and at Queensland Raceway it’ll be a step in the right direction,” Kostecki told Speedcafe.com.

“This is a perfect opportunity for us to see what I’m like and what the car’s like compared to everyone else in the main series.

“There’s a lot of other things that’ll come into play as well, like who will run the car, engineers and more staff.

“Our team (KBR) is run from Perth so there are a lot of people that we need that aren’t there at the moment.”

Kostecki affirmed that the ideal scenario would see his 16-year-old brother Jake in the co-driver’s seat for Bathurst.

“It’s definitely on the cards, it’d be cool to have me and Jake in the car together but we just have to wait and see how it plays out,” he said.

Although three sets of brothers competed in the race last year, Rick and Todd Kelly are the only duo currently with seats for 2016.

Placed 11th in the Dunlop Series with a best finish of fourth on his home track at Barbagallo, Kurt Kostecki is now focussed on his main series debut.

Uniquely, the deal with Charlie Schwerkolt came after the team’s planned substitute driver Karl Reindler had contacted KBR about using one of its chassis for the next two events.

While the Kosteckis had initially considered finding another car to continue in the Dunlop Series, an agreement was reached to put the teenager in the top flight.

“I feel I’m as ready as I can be,” said Kostecki of making his debut.

“I’ve gone through a lot of stuff with my engineer (Jason Bush) and the guys from Triple Eight have given me a lot of help and support.

“You’re never going to feel 100 percent ready but I think you’ve got to make the jump sometime.

“This weekend I’d just like to take in and learn as much as possible so I know what to go back and work on in the Dunlop Series.”

Kostecki ran a part-program in the Dunlop Series last year, completing the first four rounds in an RSport prepared Holden before focussing on preparations for 2016.