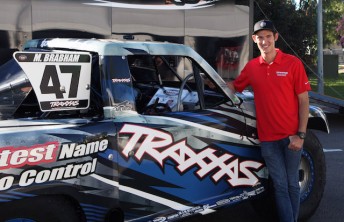 Matthew Brabham will link with a new team in what will be his ninth meeting behind the wheel in the Stadium Super Trucks at the Castrol Edge Townsville 400.

Arriving in the north Queensland city from his Indianapolis home, Brabham will take charge of the #47 Team Traxxas truck after having previously been a regular in the #83 machine for Bill Hynes.

The 22-year-old, who finished his maiden start in the Indy 500 in May 22nd for Pirtek Team Murray, leads the North American points table and is third on the corresponding Australian points score in the trucks.

After double wins from the previous round of the trucks on the undercard to the IndyCar meeting at Detroit’s Belle Isle circuit, Brabham is buoyant about returning to the high flying truck action.

“Being with Stadium Super Trucks will mean that I’m regularly at major Supercars events in Australia and at the Verizon IndyCar Series events in the US.”

While his future in the trucks remains sound, Brabham is still holding out hope of finding a slot on the IndyCar grid beyond this season.

“Our goal is still to be on that IndyCar grid and this will help us be front of mind,” he added.

While it will be the first time the trucks have raced at Townsville, Brabham last competed at the 2.86km Reid Park venue in the Australian Formula Ford Championship in 2010.