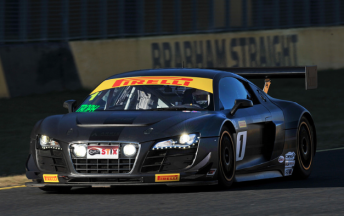 The Audi R8 GT3 driver proved untouchable in the opening 50 minute encounter crossing the line comfortably ahead of the MARC Mazda V8 of Jack Smith.

The second encounter proved a much tougher contest for Taylor as gearbox issues placed his victory hopes in doubt.

The Race 1 winner led from pole position but was unable to build a lead after losing second gear.

Taylor was forced to come from behind after the pitstops as Rob Smith (Audi) and Jack Smith battled for the lead.

Despite the gearbox drama, Taylor managed to pass the pair of them before limping to the chequered flag.

Keith Kassulke and Ryan McLeod enjoyed a strong weekend finishing fifth in Race 1, followed by a sixth in Race 2.

Meanwhile, Tony Longhurst and Morgan Haber hit trouble finishing 12th in the first heat before retiring from the final encounter.

Taylor has opened up 49 point lead over Smith in the standings ahead of the series’ visit to Queensland Raceway from July 29-31. 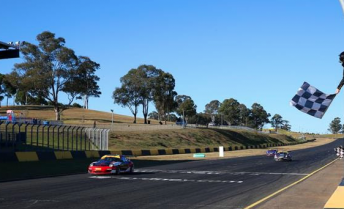 Hamish Hardeman continues to lead the Porsche GT3 Cup Challenge standings after taking out the series’ milestone 50th round.

Saturday’s race winner edged Jaxon Evans to the round win as the pair extended their on track battle into Sunday’s two heats.

Evans took the spoils in Race 2 which acted as the second part of the Jim Richards Endurance Trophy.

The Queenslander dominated the 30-lap contest as he led Hardeman home by 4.8s, while Jake Klarich recorded his second podium of the weekend in third.

The Elite Class produced a thrilling scrap with David Ryan coming out on top as he finished fourth outright. John Morriss edged Tim Miles to complete the top six.

Jim Campbell produced one of the race’s dramatic moments when his car was pitched into the air after contact with Anthony Gilbertson.

The incident saw the Queenslander retire from the race after 22 laps.

Hardeman ended the weekend on a high with victory in the final race as he once again pipped Evans to the flag with Klarich in third.

Miles finished fourth ahead of Sam Shahin to increase his lead in the Elite Class standings.

Shane Barwood was the best of the Class B runners for the weekend, taking a clean sweep of race wins in the class.

Hardeman departed the Sydney round with a 41 point lead in the outright standings. Tim Macrow extended his Australian Formula 3 Series lead after recording a convincing victory in the final heat of the weekend.

The two-time champion dominated the 15-lap feature race taking the chequered flag by 7.7s from Chris Anthony, while Cameron Shields produced an impressive drive to claim the final place on the podium.

Roland Legge finished fourth having surged from the rear of the grid.

“The car was perfect all weekend but in the final race it was as perfect as it could be,” said Macrow, who holds a 37 point lead over Anthony in the standings.

“The team has done a great job. We worked really hard this weekend with car setup for all conditions and all the different parts of the day.

“The track changes a lot so we had to adapt and it worked really well.”

Macrow was denied a clean sweep by Anthony who took out Race 2 after a faultless drive.

Anthony was forced to fend off Macrow on two occasions before taking the victory, with Ricky Capo coming home in third.

Capo, who was making a one-off return to the category, retired from the final race.

Shane Wilson won the Kumho Cup class on his return to the championship this weekend, while Shields extended his lead in the National Class.

The series heads to Queensland Raceway from July 29-31. The Western Australian holds a 14 point advantage over Will Brown, who came through a frantic tussle to win Race 2.

Brown fought hard with Luis Leeds in the early stages before going on to take the win from Rowe by 1.4s.

Rowe just held onto second by a mere 0.0048s from Simon Fallon in third with Harry Hayek in fourth.

After retiring from Race 2, Leeds, making a one-off appearance in the championship, scored his maiden Australian F4 win in the final heat.

The Red Bull junior managed to fend off Rowe to take the win by 0.2s with Hayek coming home in third.

The championship rejoins the Virgin Australia Supercars Championship for round four at Queensland Raceway from July 22-24. 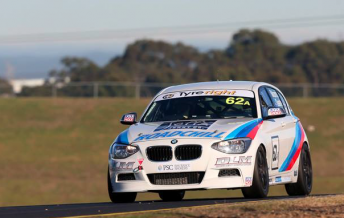 After narrowly missing out on the win on Saturday, the Class A pair combined to take the chequered flag by 11 seconds from Race 1 winners Beric Lynton and Tim Leahey.

Bob Pearson and Rick Bates (Mitsubishi) led the early laps of the contest but were forced to settle for third at the finish.

A strong drive from Aaron Seton and Kyle Alford saw the Class I Donut King BMW finish fourth ahead of the Audi TTRS of Mark Eddy and Dean Fiore.

Grant and Iain Sherrin (BMW) took out Class B with a sixth place finish.

Queensland Raceway will play host to the series for the next round from July 29-31.