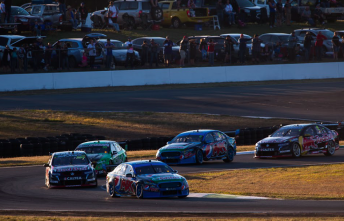 Supercars have raced at QR since 1999

CEO James Warburton is confident that Supercars will return to Queensland Raceway next year amid crucial talks over the venue’s management rights.

Previously handled as a three-event package, the Ipswich event was notably left out of this week’s deal between the Queensland Government and Supercars to continue the Townsville and Gold Coast street races for a further three years.

Supercars is instead working directly with the Ipswich City Council (ICC) on what it hopes will be a new long-term agreement to remain at Queensland Raceway.

The green light, however, is waiting on negotiations between the ICC and current circuit manager John Tetley over the future running of the venue.

ICC is understood to be angling to take control of the state owned circuit from Tetley as part of its plan to attract extensive Queensland Government investment for infrastructure upgrades.

Supercars is pushing for permanent safety changes to be funded ahead of 2017, while the ICC’s major redevelopment plan promises to upscale the entire Willowbank precinct over several years if it is awarded full backing by the government.

The ICC’s commitment to the long-term development project has been highlighted by its recent appointment of experienced motorsport administrator Damien White, as detailed on Friday.

Mayor Paul Pisasale confirmed to Speedcafe.com that a plan to take over the circuit from Tetley, who holds a long-term management contract, is “up on the drawing board” but that no deal is yet done.

Teltey meanwhile told Speedcafe.com that he welcomes the redevelopment efforts and is in discussions with the ICC over how the process will be carried out.

He, however, stressed the importance of continuing to look after his current grass roots customer base, which runs under the circuit’s own low-cost RACERS sanctioning body.

The existence of RACERS means that Queensland Raceway operates without a permanent CAMS circuit license, much to the ire of both the governing body and Supercars.

“I personally have a moral commitment to all of my customers who are all enjoying themselves in events outside of CAMS,” said Tetley, noting that RACERS has 4,000 license holders.

“There would need to be some sort of understanding that those sorts of events could continue on in the event that there was a change (of management at QR).”

Regardless of the major redevelopment plans going ahead, Warburton stresses that Supercars’ main priority is to see upgrades undertaken before next year so that a permanent CAMS license can be awarded.

Supercars invests an estimated $70,000 to install additional temporary tyre barriers for its meeting and the following Shannons Nationals event each year in order for a temporary CAMS permit to be issued.

“We’re dealing directly with the Ipswich City Council and they have highlighted some plans in terms of the facility and what they’d like to do there,” Warburton told Speedcafe.com.

“The key for us is the FIA license and getting the track to a point where it’s advanced in terms of permanent solutions for the overall safety.

“We’d be looking at securing a long-term agreement. It’s an important event. Our fans love it.

“I think we’ll be there, but we have to ensure that both the amenity and the safety side of that circuit is sorted for the long term.”