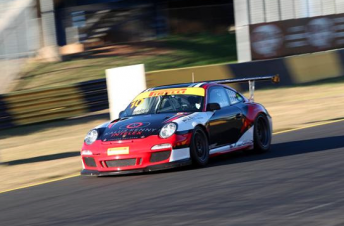 The pair leapt away from the field with Hardeman overtaking pole-sitter Evans in the early stages.

Evans applied pressure on Hardeman throughout but the latter failed to buckle as he held on to take the win by 0.3s.

“I’m very happy with that performance. Considering I have been second to Jaxon all weekend it was good that, when it finally counts, I got a good start and kept in front of him,” said Hardeman.

“I learnt a big lesson after the last time we were here when I was leading for 22 laps and then lost it under a bit of pressure. This time I managed to stay in front and get the win.

“I’m now looking forward to start off the front tomorrow. I have to make sure I drive the car properly so that I don’t wear out the tyres and try to get another win.”

Sydney racer Shane Barwood was the best of the Class B runners in 12th position.

Sunday’s Race 2 will act as the second part of the Jim Richards Endurance Trophy with the 30 lap encounter followed by a nine lap sprint in the afternoon. Nick Rowe scored his maiden CAMS Jayco Australian Formula 4 win of the season after a commanding drive at the Sydney venue.

The Western Australian made no mistakes as he converted pole position into victory, leading home the returning Harry Hayek by 0.5s at the chequered flag.

Red Bull junior Luis Leeds, making a one-off appearance in the championship, claimed the final place on the podium.

“From there on I just put my head down. I made a few mistakes and he (Hayek) got close every now and then. AGI did a great job to prepare the car. I couldn’t thank them enough.”

Team BRM’s Will Brown managed to come home in fourth ahead of Jack Smith, who is double stinting in the Australian GT Trophy Series this weekend.

Brown leads the championship standings by a point over Jordan Love ahead of Sunday’s two races. 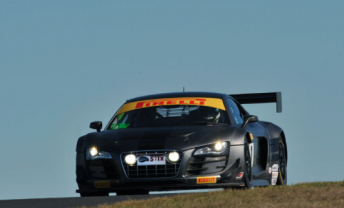 The Audi R8 GT3 once again proved to be the class of the field as he took pole by more than a second from the Lamborghini of Mathew Turnbull.

Jack Smith claimed third on the grid in the #94 MARC Cars Australia entry, while Stephen Grove was fourth fastest in his Porsche GT3 Cup Car. Two-time Australian Formula 3 champion Tim Macrow claimed his 40th win in the category with a lights-to-flag drive in the weekend’s opening heat.

The Alpine Motorsports driver dominated the race from start to finish to take the chequered flag by 2.8 seconds over Gilmour Racing’s Chris Anthony.

The Safety Car was deployed on the opening lap after Shane Wilson failed to get away from the start.

R-Tek Motorsport’s Roland Legge recovered from gearbox issues suffered in qualifying to storm from ninth to third at the flag.

Ricky Capo finished fourth on his return to the series and will start the first of Sunday’s two races from pole position.

Oliver and Greg Smith claimed the third round of the Radical Australia Cup after taking the spoils in the second 50 minute encounter.

The pair came through to take the win by 2.4s from Rowan Ross and Simon Haggerty, while Race 1 winner Peter Paddon retired after 20 laps.

After finishing fourth in the opener, Oliver Smith now heads the championship standings ahead of the final round at New Zealand’s Highlands Motorsport Park (November 11-13). 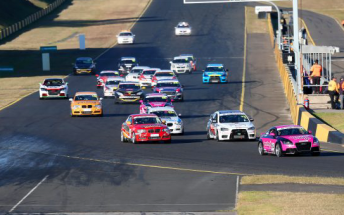 Despite suffering mechanical issues earlier in the weekend, Lynton and Leahey (BMW) combined to secure victory by just 0.6s after 53 laps of Sydney Motorsport Park.

The 250km race was cut short by 11 laps due to fading light.

Iain and Grant Sherrin finished third and claimed the honours in Class B having led the early stages of the race.

Mark Eddy and former Supercars full-time driver Dean Fiore came home in fourth after an impressive drive from the rear of the grid in their Class A Audi.

The Australian Production Car Series will return for a second 250km race on Sunday.