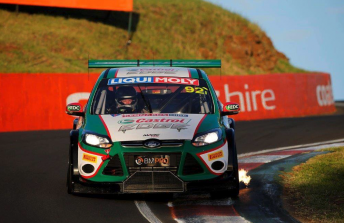 Retired racer Tony Longhurst has signalled his interest in securing a drive in the Bathurst 12 Hour as he makes a surprise race return in the Australian GT Trophy Series at Sydney Motorsport Park this weekend.

Longhurst had wound down his competitive appearances in recent seasons however has maintained a heavy fitness regimen.

He will share the drive at SMP with Australian GT regular Morgan Haber in a MARC Cars Castrol-liveried Ford Focus in the twin 50-minute races.

The 58-year-old Bathurst 1000 winner in 1988 and 2001 is itching to get back behind the wheel, adding SMP to his recently confirmed appearance in next month’s Silverstone Classic.

Longhurst, who won the 12 Hour in 2009 in a Mitsubishi Evo he shared with Rod Salmon and Damien White just ahead of the race accommodating the GT3 machines, is keen to broaden his comeback to include the once-around-the-clock Bathurst event in February.

“I did a solid job in 2009 in the Evo car and I clearly remember that I had good control and stamina in that event,” Longhurst told Speedcafe.com.

“I know that I’d be competent if I went back to do a 12 Hour race, do the middle section or a couple of stages and just chase the pace.

“I was sitting there with Jim (Richards) watching the 12 Hour this year and I said: ‘if you and I were in this we could win it’. And he said: ‘no there’s no chance’.

“You, never, never, know. I might rise from the dead.

“You don’t forget how to drive. You know what to look at, you’re relaxed.

“You’ve just got to keep your nose clean and 12 Hours up there is twice as hard as what six hours is.

“You don’t have to be young and fearless, you’ve got to be very, very smart and not make a mistake.

“I watch some of the sprint races now and you can see accidents before they happen. That’s the thing about getting old, you’ve been through it and done 25 years of it.

“You’ve done every crash, you’ve been aggressive with this person and that person.

“You’ve jumped out of the car and punched someone in the head and you know what to do and what not to do.

“It’s harnessing that wisdom and still being fit. There’s a lot of people who get to my age that aren’t fit.”

In between contemplating a racing comeback Longhurst is part of a syndicate that has been pushing for the Gold Coast to host the Louis Vuitton America’s Cup Challenger Series, a vital link in the four-yearly America’s Cup.

“If the Labor Government would allow the Waterways Authority to dredge the Broadwater we’d have it (Challenger Series) for the next decade,” Longhurst said of the plan that is relying on the silted up waterway to be finally dredged.

“I’m meeting with the America’s Cup Authority in three weeks. We could bring it here for the next decade but we could end up losing it because we haven’t got any water.

“Now its (the body of water near Sea World) just good for soldier crabs and the odd yabby at low tide.”