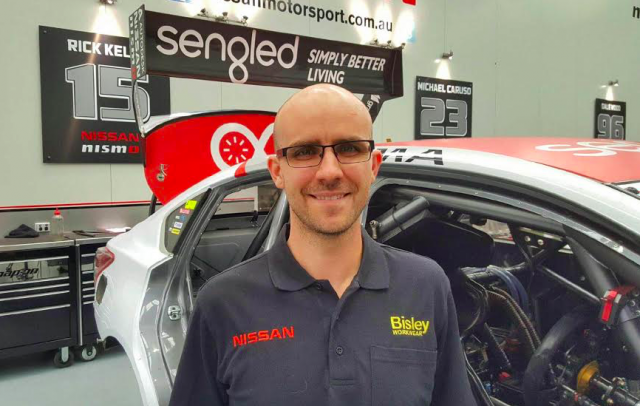 Ex-Roush Fenway NASCAR engineer Matt Rumfield is busily getting up to speed at Nissan Motorsport as he prepares to take over duties on Todd Kelly’s Altima in Townsville.

Rumfield relocated to Australia early last week to begin duties with the team just a month after first hearing of the vacancy via an online job advert.

Kelly’s season had been thrown an unexpected curveball when previous engineer and long-time Nissan Motorsport staffer Jesse Walker departed suddenly for a new job in the United States.

Rumfield will have little over two weeks at the team’s workshop in Braeside, Melbourne, before stepping into the race engineering role at his first Supercars race meeting on July 8-10.

Previously working at Ford NASCAR powerhouse Roush Fenway Racing as part of its workshop-based design team for almost two years, Rumfield says he’s keen to get back to his road racing roots.

“It was a very whirlwind move and there was a couple of rough nights getting everything sorted but I’m really excited to be here,” Rumfield told Speedcafe.com.

“I grew up as a road course racer and the move to Roush was about feeling out what it’d be like to work in a team of that size with that sort of resources.

“During my time there I did some soul searching and realised it wasn’t really for me due to the fact that I have a passion for being at the track as opposed to sitting at a desk turning parts out.

“I’ve followed the Supercars series for the last 12 years or so and I always wanted to come out here.

“As far as actually landing this role it’s definitely a win for me on all fronts.”

Although his direct race engineering experience is limited, the Las Vegas native says he learnt plenty of valuable skills from his colleagues in similar roles at Roush.

Nissan Motorsport’s facility has, meanwhile, impressed Rumfield, despite the relatively diminutive size of Supercars teams compared with their NASCAR counterparts.

“Nissan Motorsport has similarities as well as some advantages over a company such as Roush Fenway particularly in the machining department,” he said.

“This is definitely a top level facility with top level personnel and support.”

Rumfield is also looking forward to the design challenges posed by the Supercars Championship, which although featuring a swathe of control parts, offers greater freedom than NASCAR.

“The thing about NASCAR is that they give you a huge book of regs and each part has a very, very small window that you can work in,” he explained when asked to compare the two classes.

“You’re just looking at fractions of a percent in a few areas in order to get a gain somewhere.

“Here it seems to be a bit more free as far as being a bit more creative in your design.

“As far as where I come from this is a breath of fresh air in terms of freedom and manoeuvrability.”

Rumfield is not the first American race engineer to work at the Kelly family owned team after countryman Scott Besst guided the squad’s Pepsi Max Crew entry in 2012.