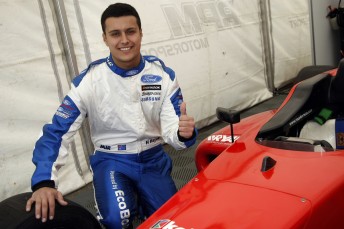 Aspiring single seater racer Harry Hayek will rejoin the Australian Formula 4 Championship this weekend after a premature end to his British F4 exploits.

The 18-year-old is set to pilot a fifth Team BRM entry when the championship reconvenes at the Sydney Motorsport Park Shannons Nationals round.

However, after three rounds the team encountered financial difficulties which has prompted Hayek’s return.

This weekend’s outing is a one-off drive as he assesses his options for the future.

“I appreciate how good they are after my English experience, and they certainly wouldn’t look out of place in any European single seater championship.

“I had not much luck in the UK. Unfortunately, the team I signed with went broke.

“But we met some great people and I’ll never forget the experience.

“This weekend for me is about having fun again. I’m really looking forward to it.

“As for the rest of this year we are just taking it race by race while we think about what direction we will head towards next season.”

Hayek is not the only F4 graduate returning to the series this weekend with Luis Leeds securing a one-off drive with DREAM Motorsport.

Leeds is enjoying a successful campaign in the British F4 Championship this year, lying fourth in the standings.

CAMS has confirmed an 11 car field for the third round of the championship.