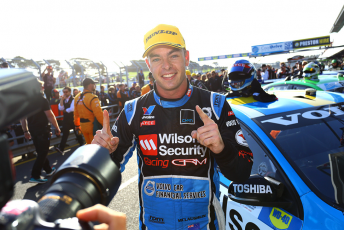 Scott McLaughlin’s move to DJR Team Penske for 2017 has been officially announced.

The team has confirmed via a statement this morning its signing of the 23-year-old to partner Fabian Coulthard from next season in a two-car line-up.

“We have watched Scott closely over the last few seasons and have admired his talent and his ability to get the best results out of his car week in and week out,” said Roger Penske.

“As we continue to raise the level of performance at DJR Team Penske we believe he will be a key addition to our team on and off the track.”

Currently in his fourth season with Garry Rogers Motorsport, McLaughlin described the deal as a great opportunity for his career.

Graduating to the championship as the reigning Dunlop Series winner in 2013, McLaughlin has taken eight race victories and 17 pole positions.

He currently sits third in the standings in a season that included a double win at Phillip Island in April.

“This is a great opportunity for me to join one of the most accomplished Supercar teams in history and, hopefully, we can continue to grow together,” said McLaughlin.

“I want to thank two absolute motorsport legends in Dick Johnson and Roger Penske for believing in me.

“I’m really excited about the future with the organisation.”

The news is a major blow for DJRTP’s current driver Scott Pye, who has been with the squad since the start of 2014.

It also leaves GRM without its star driver, compounding the impending loss of manufacturer Volvo at season’s end.

CLICK HERE to have your say on McLaughlin’s signing in this week’s Pirtek Poll.