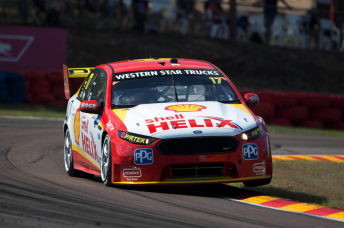 McLaughlin is set to take over the #17 Ford next season

This week’s Pirtek Poll asks for your opinion on the biggest decision of this year’s Supercars silly season.

McLaughlin’s deal, expected to be confirmed tomorrow, will see him replace Pye in the two-car Ford outfit from 2017.

Both McLaughlin and Pye graduated from the Dunlop Series to the Supercars Championship in 2013, the former with Garry Rogers and the latter with Lucas Dumbrell.

McLaughlin has since chalked up eight wins and 17 poles, with his star rising rapidly during GRM’s first season running Volvo equipment in 2014.

Pye meanwhile endured a horror run at the struggling LDM before Dick Johnson Racing provided a lifeline for the following season.

Initially demoted to co-driver duties last year before stepping in to replace Marcos Ambrose, Pye started 2016 with a maiden career pole but is still searching for a first win.

DJRTP had stressed earlier this year that it would give Pye until Bathurst before making a call on the following season, as it had done last year.

What do you think of DJRTP’s early decision? Cast your vote on this week’s Pirtek Poll.