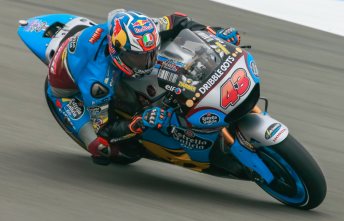 The race was run over just 12 laps after monsoon rain saw officials red flag the first attempt to complete the grand prix after 14 laps.

After a 30 minute break to allow the weather to pass, the race restarted with the grid set by the order when the encounter was stopped.

Starting from eighth on the grid on the restart, the 21-year-old Miller surged to fourth in the early laps held in tricky wet conditions.

Dovizioso had led from Danilo Petrucci and Rossi when the red flags were shown earlier in the afternoon.

Honda’s Marc Marquez assumed the lead but soon had Miller hot on his heels as the track began to dry.

With eight laps remaining Miller dived underneath Marquez for the lead before going on to complete a commanding ride to the chequered flag.

He is also the first non factory rider to win since Toni Elias at the 2006 Portuguese Grand Prix for Gresini.

Marquez tried to apply pressure on the young Australian but in the end had to settle for second.

Pramac Ducati’s Scott Redding came through to claim the final place on the podium following a late pass on Pol Espargaro.

Redding, who finished fourth in the race’s first segment, fought back from falling to 11th at the start of the restart.

Marquez has opened up a 24 point lead in the championship standings courtesy of his second place finish.

Miller, who earlier confirmed he will stay at Marc VDS Honda next season, has climbed to 13th spot.

The World Championship heads to Germany’s Sachsenring from July 15-17.

Previous Story Miller to stay at Marc VDS Honda in 2017