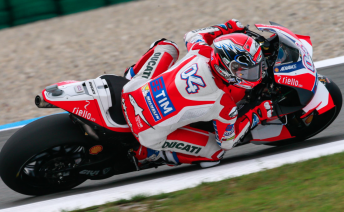 Andrea Dovizioso will start the Dutch TT at Assen from pole position after coming through an eventful rain-affected qualifying session.

The Ducati rider surged to the top of the times with six minutes remaining of a session held on a damp but drying track.

Tech3 Yamaha’s Pol Espargaro dislodged the Italian from provisional pole with the clock ticking, but a last ditch effort from Dovizioso saw him claim pole with a 1:45.246s lap.

Yamaha’s Valentino Rossi saved his best until the dying moments to claim second albeit 0.7s adrift of the pole-sitter.

Pramac Ducati’s Scott Redding made the most of the challenging track conditions to secure his maiden MotoGP front row start in third.

It proved to be a drama-filled session for Honda’s Marc Marquez which began with the double world champion suffering a fall at the halfway point of Q2.

The Spaniard was able to pick himself up and make a swift return to the pits, allowing him to rejoin the session on his spare bike.

He will be joined on the second row by LCR Honda’s Cal Crutchlow and Aspar Ducati’s Yonny Hernandez.

Suzuki’s Aleix Espargaro was eighth while Andrea Iannone, the only rider to opt for intermediate tyres, clocked the ninth fastest time.

However, the Ducati rider will start from the rear of the grid after receiving a penalty for colliding with Jorge Lorenzo during the Catalan Grand Prix.

As a result, Danilo Petrucci and Lorenzo will complete the top 10. The latter struggled to tame the conditions throughout qualifying.

Maverick Vinales also hit trouble when he fell early in the session. The Suzuki rider will start from 11th position.

A crash for Honda’s Dani Pedrosa in final practice saw the Spaniard enter Q1 on his spare bike, resulting in a lowly 15th grid slot.

Australia’s Jack Miller suffered falls in Free Practice 4 and Q1 which will see him start Sunday’s race from 18th position.

Meanwhile, prior to qualifying MotoGP confirmed that Assen has signed a new contract to remain on the world championship calendar until 2026.

In Moto2, Sydney’s Remy Gardner qualified 26th for his second start in the championship.

*Andrea Iannone will start from the back of the grid due to a penalty.