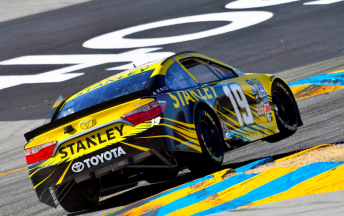 The Joe Gibbs Racing Toyota driver set the pace in both segments of qualifying; his 1:14.799s in the second run 0.4s slower than his first as track conditions deteriorated.

Allmendinger ran 1:14.878s to share the front-row for Sunday’s Toyota/Savemart 350 in his JTG Daugherty Chevrolet.

“When I saw Carl’s first lap, I said, ‘I don’t care what kind of lap I run, if he runs that again I’m not going to get close’,” noted Allmendinger post-session.

“Then, after I saw it was less than a tenth, you sort of nit-pick, but it’s definitely a big gain from where we were yesterday.”

Martin Truex and Kurt Busch made it another Toyota versus Chevrolet battle on the second row ahead of Kyle Larson (Chevrolet), Denny Hamlin (Toyota) and Joey Logano in the first of the Fords.

“I thought I had a shot after the first round but lost some grip the second round and tried harder at the same time, and all of that just didn’t work out.”

Kyle Busch, Paul Menard and Tony Stewart completed the top 10, with Danica Patrick recording her best qualifying effort of the season to date in 11th.

All four Hendrick Chevrolets failed to advance to the second round and will be led away by Dale Earnhardt Jr in 13th.