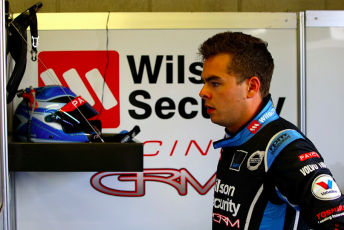 Scott McLaughlin will switch from Volvo to DJR Team Penske next season under a deal set to be announced on Tuesday.

Speedcafe.com sources have confirmed newspaper reports today that the 23-year-old will join the Queensland-based Ford squad.

The team’s interest in the young star has been public since April, prior to Volvo’s announcement that it would withdraw its factory support from Garry Rogers Motorsport at season’s end.

McLaughlin’s move locks in the biggest piece of the 2017 Supercars silly season puzzle just six events into the current year.

With Fabian Coulthard joining DJRTP this season under a multi-year deal, the news leaves uncertainty for current driver Scott Pye.

Team owner Roger Penske confirmed to Speedcafe.com in May that his squad will not expand to a third car next year, as had initially been rumoured.

The 26-year-old Pye has been with the team since 2014 and stepped in to replace Marcos Ambrose last year, saving the squad’s season as a single-car operation.

Although McLaughlin’s switch opens up a seat at GRM, the Melbourne-based team already has its own Dunlop Series star James Golding waiting in the wings.

McLaughlin graduated to the Supercars Championship with GRM in 2013 following victory in the previous year’s Dunlop Series driving a Stone Brothers Ford.