Safety improvements made to Assen circuit

Safety improvements made to Assen circuit 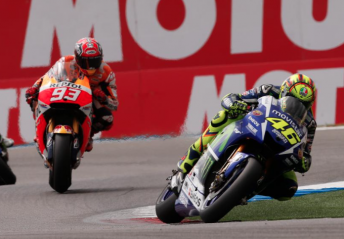 The famous Geert Timmer chicane has been modified to improve safety ahead of this weekend’s Dutch TT at Assen.

Artificial grass placed adjacent to the entry and exit of the corner has been removed in favour of a new kerb, which will be used for the first time this weekend.

The corner has decided many battles in previous races while also sparking a number of incidents due to the artificial grass run-off.

“The main focus of our work over the last two years has been to remove the artificial grass, as it can cause problems and has been responsible for a few incidents in the past.” said Javier Alonso, Managing Director of Dorna’s Events.

“We have now removed it and added the kerb to warn riders that it has changed by generating an annoying vibration. Riders will not crash if they ride over it, but it will annoy them.”

“That chicane was a great place in the past, not just me and Marc but also Schwantz and Rainey, Capirossi one time beat me in the 250s. If there’s another tight last lap it’ll be interesting,” said Rossi.

A Safety Commission meeting is due to be held on Friday where officials and riders will discuss the future track layout for the Catalan Grand Prix.

Yamaha riders Jorge Lorenzo and Rossi have confirmed they will attend having controversially skipped a Safety Commission meeting in the wake of Salom’s fatal crash.

MotoGP opening practice for the Dutch TT at Assen will begin today at 1755 AEST.