Jeromy Moore’s involvement in Porsche’s 18th outright victory in the Le Mans 24 Hour stands as one of the great achievements for Australian race engineers.

Educated at Queensland University in Brisbane before engineering Craig Lowndes at the Triple Eight squad, Moore decided to broaden his horizons in the technically advanced World Endurance Championship where he worked as a data engineer on Mark Webber’s 919 Hybrid last season.

With the Webber/Brendon Hartley/Timo Bernhard car finishing second at Le Mans in 2015, it proceeded to take the WEC title.

This season Moore was elevated sharply within the team, to race engineer on the #2 Porsche of Neel Jani, Romain Dumas and Marc Lieb which snatched victory from the jaws of defeat against Toyota in an epic 84th edition of Le Mans.

After engineering Craig Lowndes and Mark Skaife to a Bathurst 1000 win in 2010 and capturing the Bathurst 12 Hour in 2014 with Lowndes, John Bowe, Mika Salo and Peter Edwards, Moore has now added the greatest endurance race of all to his CV.

Speedcafe.com editor-in-chief Gordon Lomas caught up with Moore to discuss his flourishing career with Porsche in the wake of a euphoric week inside the German team.

QUESTION: Aside from the drama and heartbreak for Toyota at least in the last five minutes, Le Mans was a classic motor race with three cars (two Toyotas and the #2 Porsche) fighting at close quarters for much of the race. Would you agree?

JEROMY MOORE: To be within 30s at times and battling… it was constantly analysing what we could do to try to get track position. How can we beat these guys? It was just full-on the whole way.

You’ve seen Le Mans races where you lead from hour five and its just really about ticking laps down but this certainly wasn’t.

It was how do we optimise every single second the car is on the track, how to minimise time in the box, four stinting tyres or short fuelling.

The Toyotas certainly came out firing and they clearly put all their efforts into Le Mans.

Despite the last five to 10 minutes it still would have been talked about as being one of those great races.

It was a privilege to be a part of that great race.

It was full credit to Toyota. They have obviously done their homework well and they will come back even more hungry for the win next year.

QUESTION: These last 18 months must have been like a real whirlwind since taking up the job with Porsche’s LMP1 operation in Weissach?

MOORE: I wouldn’t say the right place at the right time. You could say that about a lot of things but you have to do the job at the same time.

You can’t just turn up and collect the rewards. It’s been a hard but very rewarding 18 months.

I didn’t expect in my wildest dreams to win Le Mans at my first attempt as race engineer and I’m very lucky and stoked at the same time. 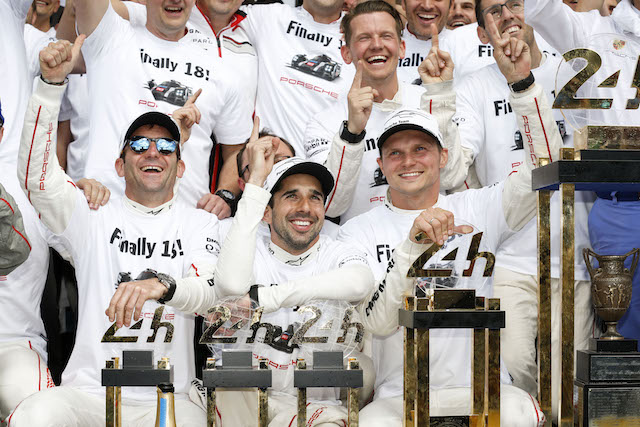 QUESTION: What’s been the process since the cars arrived back to base in Germany? Has there been any opportunity to catch a day off or is it break down everything from Le Mans and prepare for the next race?

MOORE: No. We’ve just had to make sure that everything that needed to be done was done quickly. Previously there was two months between Le Mans and the next round at the Nurburgring but because Mexico has been added to the calendar this year it is now only a month away.

But I’m going to take some time off next week.

The whole calendar is phased around Le Mans so the start of the year is absolutely hectic with testing and the two other races (Silverstone and Spa) and then once you get over the Le Mans race it slows down a little bit.

Having said that there’s still six races to go but they are now a bit more evenly distributed without too many tests in between.

QUESTION: With the extra race this year there is a total of 72 hours of racing, eight six hour races and Le Mans which is a pretty gruelling competition schedule.

MOORE: Yeah when you think we’ve got nine races it’s not much on the surface but then every race bar Le Mans is essentially a Bathurst and then Le Mans is really four Bathursts crammed into one day.

The number of hours you are physically competing on track is pretty long.

I wouldn’t say Bathurst is easy but you really need luck on your side to win Le Mans.

A lot of drivers say that you don’t win Le Mans. It selects you to win. You have to do everything you can but even still if you’ve done everything physically possible, there’s lots of things thrown at you that are just out of your control.

You are in the hands of god almost in terms of a victory.

You have to minimise the number of times you have to fix the car and I think car #2 (the winning Porsche 919) was the only one not to have to go into the box for repairs.

Then there’s the weather conditions. It was pouring down at the start and you have to pick which tyre to go on and when to change.

Ultimately to be the fastest you go to slicks early but its a 24 Hour race and you don’t want to put the car in the wall in the first hour. QUESTION: It really was a challenging event right from the wet qualifying to the wet start under the Safety Car.

MOORE: Most of the sessions were compromised by wet weather so it was really just a matter of trying to throw one lap together for qualifying, then hope you don’t get too much traffic.

Le Mans is all about traffic. Even on our qualifying lap everyone maybe bar one Toyota didn’t actually get a clear lap.

We (#2) caught traffic in the Porsche Curves and lost time. Even though its a long lap (13.6km) you always seem to pick up GT cars where you don’t want it.

QUESTION: Being promoted this year into the role as race engineer on the #2 car, you don’t get that from just being a nice bloke. You have to earn your stripes and that must be extremely gratifying.

MOORE: It is very rewarding and nice to see that you are being recognised for your efforts and getting the opportunity to step up.

They must have seen my potential to perform the race engineering role and had faith that I could deliver.

In general I think Australians in motorsport succeed (as well as our New Zealand friends) because of our practical nature.

We grow up thinking about the most efficient way to do things to get the best results the quickest as often we have grown up with less resources.

We have had to make do with what we have.

QUESTION: Without giving too many secrets away what has been the biggest difference that you have made that has seen the top brass at the LMP1 team sit up and take notice?

MOORE: A lot of it is just attitude. I want to get the best out of the car. It’s almost counter intuitive, I want to be there to improve the performance of the car and not worry about trying to move on up the corporate ladder.

It’s about asking the silly questions but sometimes they lead to the right answers.

I have just worked hard and have good knowledge of the car itself in terms of how to make a car go fast.

Generally when you are in these environments it is very departmentalised.

Having knowledge back from Australia and having worked on a lot of the car in terms of the design and manufacturing and engineering the car, you get a really good insight into how to make a car operate fast.

Even though this car has two engines (combustion and electric) and a lot more downforce, it’s still tyres that are touching the ground that is producing the lap time.

It’s been good that I’ve been able to bring some of my experience over, albeit quite different.

I’m a hard worker and I’ve got the right attitude and I can work with people and I think I’ve got some good ideas. Maybe outside the box a bit but it’s worked along the way.

QUESTION: You would have had an idea before you went over but what are your impressions of the 919 which is massively technically advanced and complex and leads the motor racing field in many of those areas?

MOORE: I expected it to be technically challenging but not half as much as I saw when I got here.

All the people who are working on it are smart people and are optimising their own little areas, the internal combustion engine, the hybrid, the aero… everything is down to the nth degree.

To come here and see this is quite amazing.

I wouldn’t say there isn’t any detail on Supercars back home, it’s just that they are two totally different animals.

This car is effectively a space shuttle on wheels almost.

The number of systems which run the car is just unbelievable. 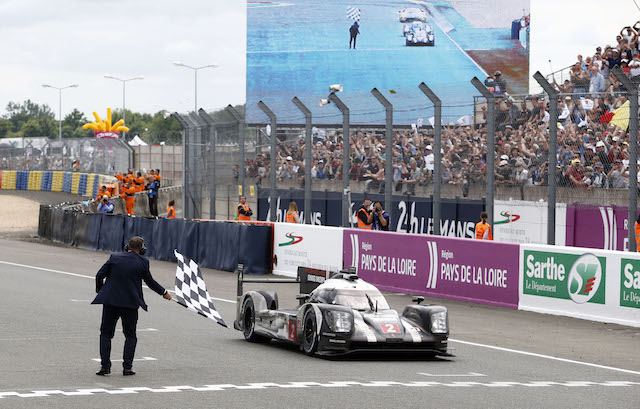