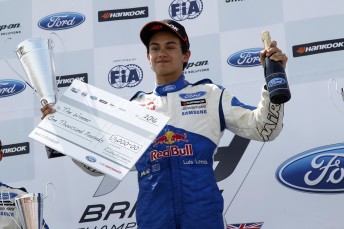 Luis Leeds will contest the third round of the CAMS Jayco Australian Formula 4 Championship at Sydney Motorsport Park next weekend in a one-off drive.

The Red Bull junior driver from Melbourne will rejoin the DREAM Motorsport squad which guided him to sixth in the championship last year.

Leeds returns to Australia following an impressive start to the British Formula 4 Championship which has seen him score two race wins on his way to fourth in the championship standings.

His #20 DREAM Motorsport car will be supported by long-time sponsor Peter O’Shea of Austrans.

The 16-year-old says he is looking forward to challenging for a maiden Australian F4 race win.

“It’s been a really long time since I’ve been back to Australia. It’s a bit of a flashback really to get to race with DREAM again,” said Leeds.

“I’ve learnt a lot since I’ve been in the UK, in the first half of the season. Surely I’ll be able to take some of it back home.

“Last year I never got the race win, I kept coming second, hopefully I can come back and tick off that race win.”

Leeds is set to return to Great Britain next month to contest the remaining rounds of the British Formula 4 Championship.

“All the other (British F4) guys will be practicing throughout the summer break of course. I’ve got to make sure I get my practice and prep in before the next round at Snetterton,” Leeds added.

“To get in a few extra miles is pretty handy. It’s also good to just come back home.”

It is the first time the championship has joined the Shannons Nationals package.