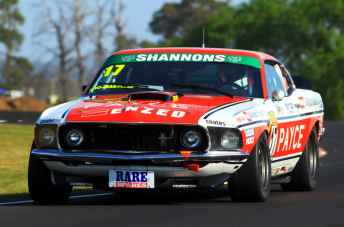 Bowe has struck a deal to sell the 1969 model Ford to friend Tony Warne, marking the end of an era for the Tasmanian.

The former two-time Bathurst winner bought the car from fellow TCM competitor Drew Marget in 2010 before taking it to the title in 2011, 2012 and 2014.

Steven Johnson took over driving duties when Bowe made the switch into Garry O’Brien’s Holden Torana midway through last year.

Bowe, whose own backers subsequently bought the Torana from O’Brien, has remained in the Holden this season but could not find the budget to continue to field the Mustang for Johnson.

With the Ford sitting idle, Bowe says that the decision to sell is based primarily around the need to buy more spares for the Torana.

Since being sold to Bowe, the Mustang has won 74 TCM races in 153 starts.

In addition to its on track success, the car has played an important role in the veteran’s life.

As recently outlined, racing in the TCM helped Bowe overcome the depression that he suffered after his full-time V8 Supercars career came to an end in 2007.

“I obviously have a strong connection to it,” Bowe told Speedcafe.com of the Mustang.

“I’m a reluctant seller, but Tony is a mate so I’m sure he’ll let me borrow it if I ask.

“I’d rather have him have it then sell it to anyone else.

“We’re going to get it ready to race again before delivering it to Tony.

“He’s bought it just for fun, but I’m trying to talk him into racing it.

“The category is about having fun so I’d love to see him in it.”

After a long career of driving other people’s machinery, the Mustang was the first and so far only race car to be owned by Bowe.

Although the sale price remains private, Bowe joked of the car’s true cost.

“It’s probably the most expensive Mustang in the history of the world,” he laughed.

“Not for the sale price, but for the money spent on it over the years.”