Reindler: Nothing to prove in Supercars return

Reindler: Nothing to prove in Supercars return Karl Reindler will be taking a conservative approach when he makes his first Supercars sprint event start in four years at the Castrol Edge Townsville 400.

The 31-year-old has been called in to substitute for the injured Lee Holdsworth in the Team 18 Holden that he was already scheduled to co-drive in the Pirtek Enduro Cup.

Team owner Charlie Schwerkolt confirmed to Speedcafe.com on Tuesday that Holdsworth will be out for at least the next two events due to his injuries.

Reindler competed in three full-time Supercars seasons from 2010, finishing a best of 24th in the standings across two years at Brad Jones Racing and a single campaign at Kelly Racing.

“Charlie knows that I’ve got nothing to prove,” Reindler told Speedcafe.com.

“I’ve got nothing to gain by being out there and I’m not going to do anything silly.

“It was an expensive crash which is a big blow to any budget so I just want to keep it clean and learn about the car before the endurance events.

“I’m really gutted for the team that Lee is out of the car.

“It’s a real family in there and I’ve been lucky to be involved from the start.

“It’s a massive blow to the momentum that they’d been building.”

After continuing with Kellys for the 2013 Enduro Cup, Reindler spent a year away from the Supercars scene due to the birth of his daughter.

Impressing on his return as a co-driver at Lucas Dumbrell Motorsport last year, the Melbourne-based West Australian says he has no ambitions of racing full-time in the category again.

Reindler’s time is split between driver training with car manufacturers and driver development duties with the Confederation of Australian Motorsport.

“From my point of view I’ve got a young family now and I’m just enjoying the endurance thing,” he said.

“You’re still part of the team and working towards something and there’s still pressure, but it’s three weekends a year.

“I’d just like to solidify myself as a good co-driver for however long I can continue to do it.

“I’ve been there and done the full-time thing and really enjoyed it.

“I learnt a lot over those three years that set me up to be in the position that I’m in at the moment.

“It’s easy to look back at some decisions I made that weren’t the right ones, but I don’t have any regrets.”

Reindler will replace Holdsworth for Townsville and Ipswich, with the team hopeful that its primary driver can return for Sydney Motorsport Park in late August. 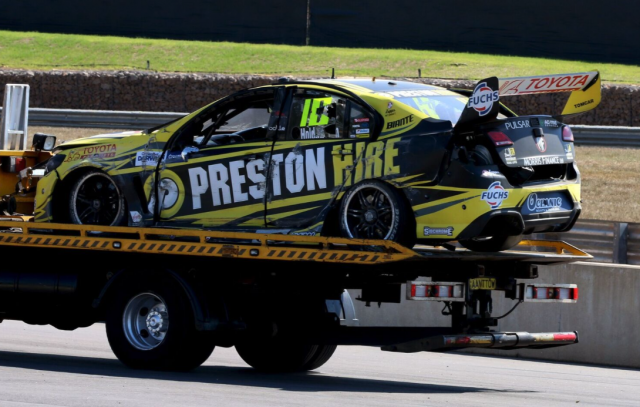