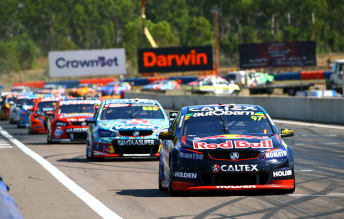 SVG on the way to victory in Race 13

Shane van Gisbergen is confident that he’s finally found a comfortable balance in his Red Bull Holden after a standout weekend at Hidden Valley.

Although enjoying early success with the squad this season, the Kiwi admits he has had to work to refine the latest generation Triple Eight package to his liking.

After failing to take a front-row start or win across Phillip Island, Barbagallo and Winton, gains made at a pre-Hidden Valley test day bore immediate fruit.

Only a restart infringement stopped the 27-year-old from taking a clean sweep of the weekend as he scored two poles, a win and a 16th.

“We have a really fast car and now it’s comfortable as well,” said Van Gisbergen after Race 13.

“I’ve really struggled with that over the last few rounds and now it’s nice to drive and fast.

“We basically spent all test day trying to make it nice, it didn’t go very fast but at least the car was comfortable.

“To me a car that is comfortable and is balanced is better than a car with grip, so we just worked on that when we got here and it was much better.”

Van Gisbergen is fifth in the championship after Hidden Valley, mirroring his position from this time 12 months ago.

Mixed results for all of the front-runners over the first 13 races however see Van Gisbergen just 71 points adrift of the top spot compared to 225 last year.

Notably, errors while in the lead at both Symmons Plains and Darwin cost a combined 243 points, while he lost a further 10 due a post-race penalty at Winton.

“I keep throwing myself out of it with my own mistakes so we’ve got to tidy those things up,” he said of the points picture.

In order to win the title Van Gisbergen will have to overcome his Triple Eight team-mates Jamie Whincup and Craig Lowndes, who sit one-two after Darwin.

Lowndes, who was also second at this point in 2015 and has finished runner-up four times in the last five years, says there’s no clear title favourite yet.

“I think it’ll be up and down, back and forwards,” he said of how the championship will play out after finishing third in Race 13.

“I’m really happy to be second at the moment. It’s really close, you can put a blanket over the first five cars.

“We’ve got to this point last year and there’s a clear one or two cars or teams, drivers sort of the favourite but at the moment you can’t gamble on anything.”

The championship will continue at the Castrol Edge Townsville 400 on July 8-10.