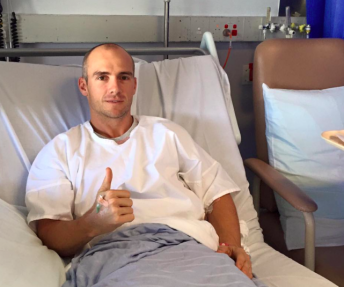 Injured Supercars driver Lee Holdsworth has been cleared to return to Melbourne in order to continue his recovery.

The 33-year-old has been in Royal Darwin Hospital since fracturing his pelvis in a crash on the opening lap of Sunday’s race at Hidden Valley.

In an update on his Facebook page, Holdsworth has confirmed that he will not have to undergo an operation on the injury.

Detailed assessment of damage to the ligaments in his right knee will take place alongside further hip treatment at Freemasons Hospital in Melbourne.

“Transferring to Freemason’s Hospital in Melbourne this afternoon for specialist treatment,” wrote Holdsworth.

“No operation needed on pelvis, still have to assess right knee for damage once in Melb though.

“Thanks to @Dr_Carl for his ongoing help and support, he’s been co-ordinating everything and been bloody awesome, the staff at Darwin Hospital, and to James Warburton and his team for getting the best flights and care from @VirginAustralia.

“Mum and Dad have been amazing and I’m now looking forward to getting home and starting my recovery with Alana and Ava by my side.

“Couldn’t ask for more support from my family, team, friends, fans, sponsors, and the Supercars group. Thank you.”

Holdsworth is expected to be replaced by Pirtek Enduro Cup co-driver Karl Reindler for the upcoming Castrol Edge Townsville 400 on July 8-10.

The heavily damaged Team 18 Holden is meanwhile on its way to Queensland, where it will be repaired by chassis specialist Pace Innovations.