Rising Australian stars Luis Leeds and Zane Goddard emerged victorious in the fifth round of the British Formula 4 Championship at Croft.

Gold Coast driver Goddard clinched his maiden triumph in the category with an impressive lights-to-flag drive in the opening race.

The Double R driver faced pressure in the latter stages when the Safety Car was deployed.

Despite the interruption, he went on to take the win from Max Fewtrell and countrymen Leeds.

Leeds proved to be the star of the second race as the Red Bull junior recorded his second British F4 win of the campaign, having started from third on the grid.

The Melbourne driver came under intense pressure from Goddard before taking the chequered flag by 0.5s with Fewtrell in third.

Goddard narrowly missed out on a second win in the final race after surrendering a lead from pole on the opening lap.

The Aussie teenager was unable to keep pace with Devlin Defrancesco in the wet conditions and settled for second, while Leeds came home in 10th position.

“For the first time this season I went into the races aiming for a podium and even the top step instead of top five,” said Goddard, who set the fastest lap in each of the three heats.

“We achieved that so it’s a definite confidence boost. The team and I have made a step forward this weekend. The team have done a great job. I cannot fault the car.”

Leeds has jumped up to fourth in the standings with Goddard climbing to 10th spot.

The championship moves to Snetterton for the next round from July 30-31. 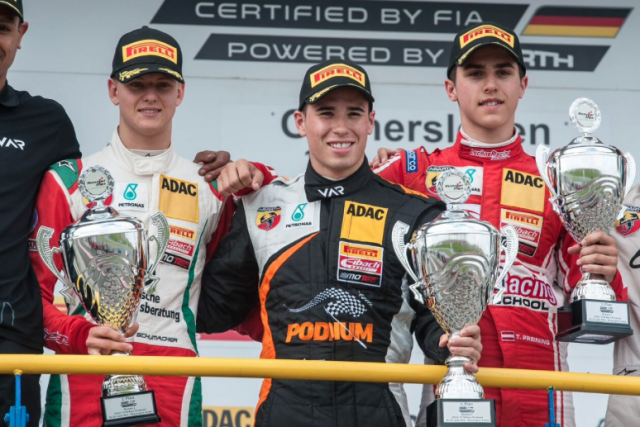 The Sydney driver, who started from third, charged down the leaders in the opening race.

Mawson passed title rival Mick Schumacher and Thomas Preining before going on to take the chequered flag by 1.5s.

The young Australian completed a start-to-finish win in the second race as he led home Schumacher and Mike-David Ortmann.

However, Mawson’s weekend ended on a sour note with a retirement in the final heat.

The Van Amersfoort Racing driver found himself down the order at the start of the reverse grid race, before contact with Jannes Fittje damaged his front right wishbone, sending him into retirement.

“I had quite a good weekend, the last race didn’t quite go to plan but overall it was a very solid weekend.  I came into the weekend with a three point lead and leave it with a 20-point lead,” said Mawson.

“Oschersleben seems to be a special place for us, we’ve always had a quick car there.

“Overall everything is very positive and I’m leading the championship at halfway, now I look forward to a big second half of the year.”

Mawson has now opened up a 20 point lead over Schumacher heading into the next round at Austria’s Red Bull Ring from July 22-24. The series remains on a knife-edge following a hectic round at Baku which saw Antonio Giovinazzi score twin wins.

It marked the first time a driver has taken double wins since Davide Valsecchi achieved the feat at Bahrain in 2012.

Giovinazzi had climbed his way back from 22nd to lead PREMA Racing to a quinella with Pierre Gasly second and Sergey Sirotkin third.

The weekend results has seen Russian Time driver Artem Markelov hold a slender lead in the points as he moved to 54, five points ahead while Giovinazzi is just nine points behind in third.

The next round is scheduled for the Red Bull Ring from July 1-3. Colin Turkington, Rob Collard and Ash Sutton shared wins at the Croft round of the British Touring Car Championship.

The pair seemed to have the field’s measure in the second race however after swapping positions earlier Turkington and Plato came together on Lap 5, which allowed Rob Collard to spear to victory in the WSR BMW.

Plato finished second with Turkington third however neither pair would make the podium in the final race.

Youngster Sutton was able to claim his maiden win in the championship ahead of Sam Tordoff (WSR BMW) and Tom Ingram (Speedworks Motorsport Toyota).

The BTCC moves to Snetterton for the next round from July 30-31. 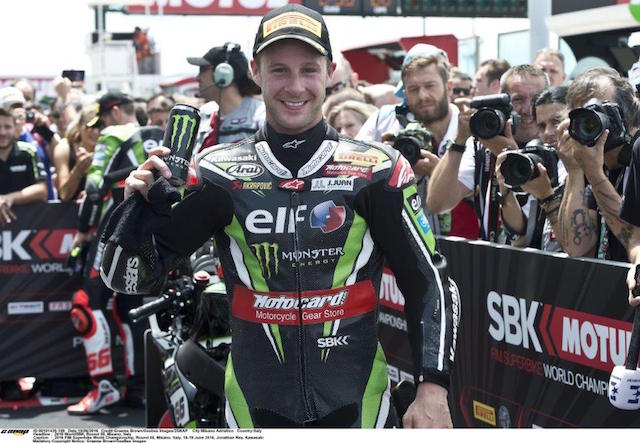 Rea then completed the double after hounding Sykes before moving clear with five laps remaining to take the flag by an impressive 3s.

After crashing in Race 1 Davide Giugliano finished third on the Aruba.it Racing Ducati.

Rea has now moved to a clear lead on 343 points from Rea on 277 following the eighth round.

Round 9 sees the championship move to California’s Laguna Seca from July 8-10.