POLL: Who impressed you most in Darwin?

POLL: Who impressed you most in Darwin? 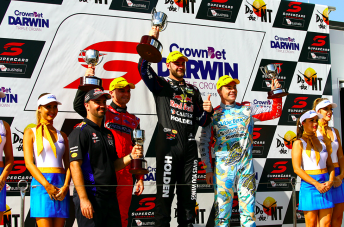 The latest instalment of the Virgin Australia Supercars Championship at Hidden Valley brought with it a range of standout performers.

Which driver impressed you most across the weekend?

Read through our shortlist of contenders before casting your vote on this week’s Pirtek Poll.

Stole the headlines on Saturday by breaking through for his first win in seven years and, perhaps more importantly, Nissan’s first in three.

Did so in impressive style, winning the start, keeping his head amid a chaotic Safety Car restart and lighting up the time sheets when it mattered after his pitstop.

Struggled with an understeering car in the Shootout on Sunday to start just ninth before rounding out his weekend with a solid drive to sixth.

Two poles and a win proved a return to form for Van Gisbergen after a difficult run, particularly in qualifying, last time out at Winton.

Recovered well from a small error on the opening lap on Sunday and crucially did what he had to during the early pitlane mess to keep himself in contention.

Crossing the control line ahead of the leader on Saturday’s Safety Car restart was however, by his own admission, a silly error, the likes of which must be eradicated if he is to win the title.

Third on Sunday proved another strong result for the veteran, vaulting him from fourth to second in the championship standings.

Also left the weekend with the qualifying record thanks to his lap on Sunday morning; an effort that ultimately hurt him thanks to the rising track temperatures in the Shootout.

Earlier recovered impressively from last to 11th on Saturday after finding himself an innocent victim of a Turn 5 concertina on the opening lap.

Proved he still has plenty to give as a driver in the Supercars Championship on a weekend that saw Perry Kapper make a one-off return to engineering duties on the #7 Altima.

Avoided the early chaos to drive from 14th to seventh on Saturday, nursing home a wounded tyre over the closing laps.

Made the most of favourable track conditions in Sunday’s Shootout to score his first front-row start in five years before winning the start and then being punted out of contention on a Safety Car restart.

Entered the weekend with unfamiliar public expectation on his shoulders due to his Winton victory and Brad Jones Racing’s form at Hidden Valley last year.

Had a difficult Saturday, qualifying eighth before dropping back in the Turn 5 melee and taking the flag 13th.

Turned it around by converting fourth on the grid into second on Sunday, cooly holding off the advances of Lowndes in the closing stages.

Achieved much without making the headlines and left Hidden Valley with the second highest weekend points haul behind Caruso.

Started third and finished fourth on Saturday after running a marginally longer first stint than Caruso lost him track position to the eventual winner.

Missed the Shootout on Sunday, but made a three-stopper work to again finish fourth after being delayed by a double-stack at his first stop.