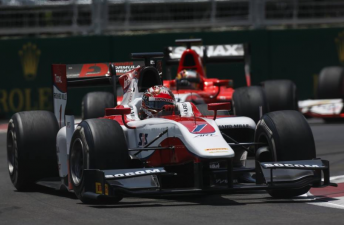 GP2 driver Nobuharu Matsushita has been issued with a one event ban for erratic driving during the sprint race at Baku.

The Japanese racer will sit out the next round in Austria (July 1-3) for causing incidents during Safety Car restarts at the Azerbaijani circuit.

The first saw the ART driver catch the Safety Car too soon prior to a restart.

He then triggered crashes further down the field by accelerating and then slowing on the start/finish straight on the second restart.

Matsushita eventually retired from the race when he collided with Raffaele Marciello on the third and final Safety Car restart.

“Following today’s Sprint Race at Baku, Nobuharu Matsushita was found guilty of driving in an erratic manner, causing danger to other drivers during the Safety Car period,” read a GP2 Series statement.

“At the end of the first period, it was found that the Japanese driver overtook the Safety Car before the Safety Car line and drove in an erratic manner, causing danger to other competitors.

“At the end of the second period, Matsushita was found guilty of driving in an erratic manner, accelerating and braking, again causing danger to other competitors and causing several collisions to cars following him.

“As a consequence, the ART Grand Prix driver will be suspended for the next round at Spielberg.”