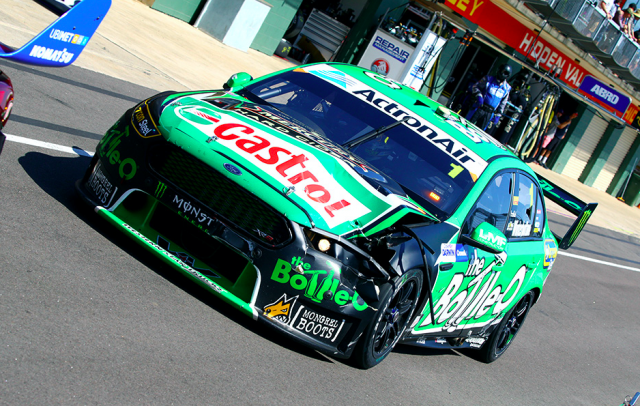 Winterbottom’s damage after his hit with Todd Kelly

Mark Winterbottom labelled Race 13 “one of my worst efforts in a race car” after a 200km contest that included two penalties for driving infringements.

The reigning champion made a crucial misjudgement at the first Safety Car restart, slamming into the back of Todd Kelly’s Nissan under brakes at Turn 1.

The contact bent the left-front corner of The Bottle-O Ford and resulted in a drive-through penalty, burying Winterbottom down the order.

Fighting for 16th in the closing laps, Winterbottom was dealt a second drive-through when he tagged Aaren Russell into a spin at Turn 7.

Winterbottom had pulled a clean move on Russell two corners earlier, but lost momentum when he was bumped wide while attempting to round up Rick Kelly at the hairpin.

“The incident at the end happened after I had been pushed off the track,” Winterbottom lamented after finishing 20th and falling from second to fourth in the standings.

“I pushed back but got the penalty. It was bizarre. I am not going to be pushed around.

“I take responsibility for the first penalty as I unfortunately wrecked (Todd’s) race, but I don’t agree with the second one.”

Winterbottom said that the contact with Todd Kelly had been an unfortunate misjudgement.

“I tried to position myself but when he went defensive I tapped his rear guard and hit him in the worst spot possible,” he said.

“His rear end crumpled, as did my front end, and it was a shame for both of us.”

Winterbottom’s woes came amid a horror day for Prodrive that saw Chaz Mostert taken out of contention in a first-lap crash with Fabian Coulthard.

The Supercheap Ford was repaired and eventually took the flag 15 laps down in 23rd position.

Team-mate Cameron Waters was just one position better off after contact in the pitlane saw a second broken upright on the Monster Falcon in as many days.

“It was a weekend where nothing went to plan,” said the rookie.

“When I pitted the whole lane was blocked.

“I thought there was more room than there was and I managed to clip Garth (Tander) and broke another upright.”