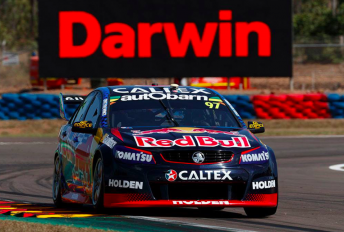 Shane van Gisbergen made amends for a costly mistake on Saturday by storming to his second win of the season in Race 13 at Hidden Valley.

The 200km contest was marred by a heavy crash on the opening lap that saw Team 18’s Lee Holdsworth taken to hospital with a suspected broken leg.

A wild opening lap also saw a big hit for Fabian Coulthard and Chaz Mostert that took both Fords out of contention.

CLICK HERE for Speedcafe.com’s separate story on the accidents.

Pole-sitter Van Gisbergen endured a scrappy first lap of his own, losing out to Todd Kelly off the start before dropping to eighth by running wide at Turn 5.

The early action required a lengthy Safety Car, which saw the field pile into what proved a chaotic pitlane.

Craig Lowndes emerged from the stops with the lead from Kelly, Mark Winterbottom, Van Gisbergen and Tim Slade.

Van Gisbergen immediately moved to second on the restart when Winterbottom misjudged the braking area and punted the back of Kelly, earning the Ford a drive-through penalty.

A second Safety Car was required after another wild restart lap, which this time saw Scott Pye clatter into Michael Caruso at Turn 6, leaving the Ford stranded on the circuit.

Will Davison and Jamie Whincup were among few to take another drink of fuel under the yellows having already lost track position when forced to stack at the opening round of stops.

Van Gisbergen took the lead from Lowndes at the second restart and subsequently held the advantage when the second stops unfolded at half distance.

A late Safety Car due to tyre debris from Tim Blanchard’s Holden then provided a nine lap shootout to the end, which Van Gisbergen controlled comfortably.

Slade scored second after jumping Lowndes at the second stops and holding out the TeamVortex entry in the closing laps.

Davison made the best of his three-stop strategy to take fourth ahead of James Courtney, who salvaged a solid result from a rough weekend at the Holden Racing Team.

His early sparring partner Todd Kelly finished 13th, while Rick Kelly was 15th after being delayed in Pye’s early accident.

Whincup now leads the championship by 30 points from Lowndes, with McLaughlin a further 15 back in third and Winterbottom falling to fourth.