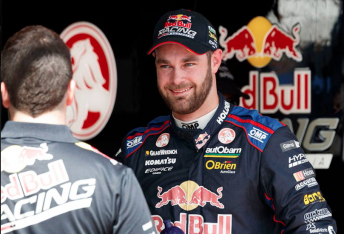 Shane van Gisbergen scored his second Armor All Pole Award in as many days in the Top 10 Shootout for Race 13 at Hidden Valley.

The Kiwi was the fourth man out in the Shootout, recording a 1:06.68s that would not be beaten.

Times were over 0.5s slower than Craig Lowndes’ provisional pole from the morning’s qualifying as significantly hotter conditions greeted the drivers.

“The track was so much hotter, it was so slippery,” he added of the Shootout.

“Everyone was sliding around and the times were much slower.

“I mucked up into Turn 5, I lost the rear, and in the last corner as well, but it wasn’t too bad.”

Todd Kelly was the first driver on track and will start second, lapping just 0.05s slower than Van Gisbergen.

“I’m really happy about that, it was really enjoyable to drive,” said Kelly.

“We used all our tyres just to get into the Shootout and the car was tuned perfectly for the grip level we had.”

Mark Winterbottom ended up third despite battling an oversteering Bottle-O Ford on his lap.

Tim Slade’s Freightliner Holden was similarly loose on the way to fourth ahead of this morning’s pace-setters Rick Kelly and Lowndes, who faced the worst of the track conditions.

Saturday winner Michael Caruso ran wide at Turn 1 as he struggled to get his Nissan to the apexes.

“The front tyres didn’t come up on me so I had a little bit too much understeer throughout the whole lap,” he said.

Half a second covered the top nine, while Whincup was a further 0.5s adrift after a big slide into the final corner.